'I thought the Finance Minister said yesterday she does not eat onions, she is not bothered... What does she eat?' Chidambaram said. 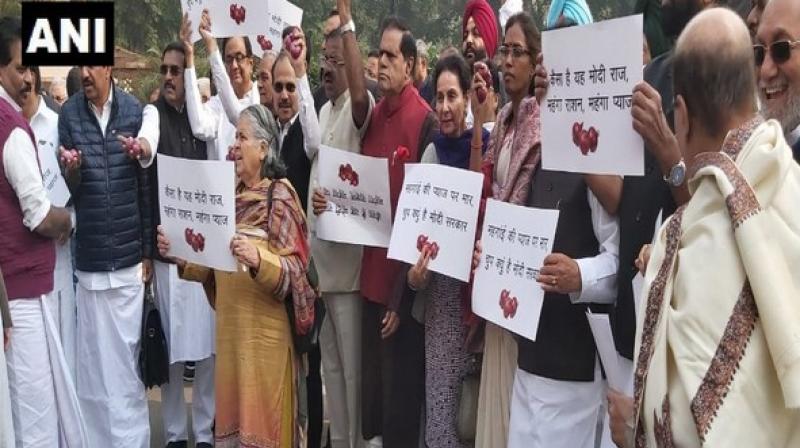 This came a day after Finance Minister Nirmala Sitharaman elaborated on key measures being adopted by the Centre to bring prices under control. (Photo: ANI)

This came a day after Finance Minister Nirmala Sitharaman elaborated on key measures being adopted by the Centre to bring prices under control.

The minister dismissed opposition charges about fear factor in the economy and said that that government has taken a series of steps to check the steep rise in onion prices including imports.

Sitharaman, who was replying to the debate on the first batch of supplementary demands for grants for 2019-20, said that onion price surge was due to factors such as a reduction in the area of cultivation and production.

Sitharaman on Wednesday also said that she doesn't eat much of onion or garlic and hails from a family where these two vegetables are not much in use. Her remarks about personal eating habits came while responding to interruptions by some opposition members at a time when she was speaking on the onion issue.

"I don't eat much of onion-garlic. I come from such a family which doesn't have much to do with onion", she said.

Shanmuga Priyan, an onion trader in the region said, "Onion prices have shot up. Customers who were buying 5 kg are now only buying 2 kg. We are selling good quality onions for Rs180 per kg. Lower quality onion is priced between Rs 120-130 per kg".

Senior Karnataka Congress leader Dinesh Gundu Rao also took a veiled jibe at the Centre over the rising prices of onion on Thursday saying that those who purchase a lot of onions will get Income Tax notice.

"Today the price of onion is so high that if you buy a lot of onions in bulk, you may get Income Tax Notice. Petrol prices, diesel prices, onion prices all have hit the roof," he said.