Of the 27 named, at least four are workers and functionaries of right-wing organisations, including the Bajrang Dal. 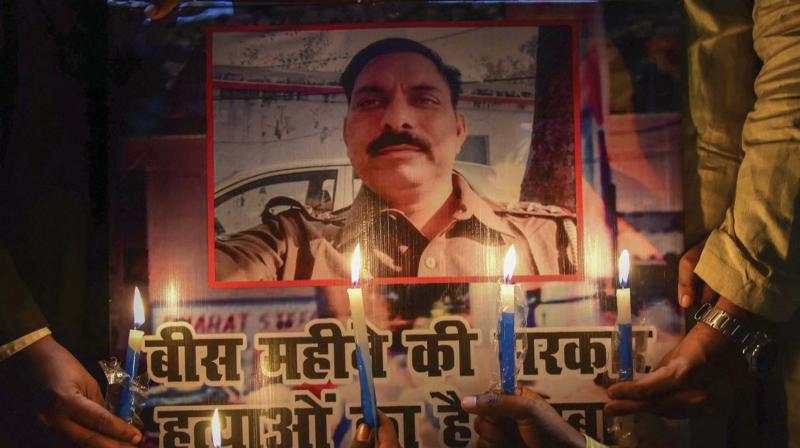 The son of the police inspector killed in the violence said his father wanted him to be a good citizen who doesn’t provoke violence over religion. “My father has lost his life in this Hindu-Muslim dispute. Whose father is next?” Abhishek Singh said.

Lucknow/Ballia: Yogesh Raj, the Bajrang Dal’s district coordinator in Bulandshahr, was named as the main accused in the killing of police inspector Subodh Kumar Singh and another youth Sumit in Monday’s violence in Bulandshahr. ADG (law and order ) Anand Kumar told reporters in Lucknow on Tuesday that three Bajrang Dal activists — Chaman, Devendra and Ashish Chauhan — had already been arrested but Yogesh Raj was absconding.

The police said two cases had been registered — one for the murder of Syana police inspector Subodh Kumar Singh and Sumit, and the ransacking of the police post and damage to public property. The other case is about the wider conspiracy to create trouble over the alleged cow slaughter.

The FIR has 27 named as accused and another 60 as unnamed accused for Monday’s violence.

The probe into the incident is being headed by ADG (intelligence) S.B. Shirodkar, who is expected to present his report within 48 hours. He is already in Syana for the probe.

Interestingly, immediately after the discovery of the reported cow carcass in the fields of a former gram pradhan in the village, Mahav Raj Kumar, the main accused, Yogesh Raj, had lodged an FIR naming five local Muslims all members of the local masjid committee. However, preliminary investigations have revealed that none of those mentioned in his FIR were present in the village for the past few days as were participating in a three-day “ijtema” (congregation of Muslims for throwing light on the Holy Quran and its significance for achieving salvation) being held in Bulandshahr, where 25 lakh Muslims had gathered.

According to the Syana Nagar Palika chairperson Rais Malik, SO Subodh Kumar Singh was instrumental in thwarting a major conspiracy to create trouble on the last and concluding day of the “ijtema” when people were preparing to disperse.

Yogesh Raj and his accomplices had carried the remains of the cow in a tractor-trolley and blocked the main Bulandshahr-Garh road on which many people from the “ijtema” had already started returning. “By not permitted blocking of the main highway, the SO had defeated the design of troublemakers planning to brew communal tension. But in the process he was targeted and first brutally injured in the brickbatting and then shot dead by the mob”, said the chairperson. This theory has now been confirmed by the ADG.

The son of the police inspector killed in the violence said his father wanted him to be a good citizen who doesn’t provoke violence over religion. “My father has lost his life in this Hindu-Muslim dispute. Whose father is next?” Abhishek Singh said.

The sister of the slain inspector told reporters that her brother was lynched as he had investigated the 2015 Dadri lynching case, where Akhlaq was lynched for allegedly storing beef in his house. She alleged her brother was “abandoned” when the mob attacked him.

The inspector’s family has demanded the status of “martyr” for Subodh Kumar Singh and a memorial for him in the village. The body of the slain inspector was taken to his ancestral district Etah on Tuesday for his last rites after the ADG (Meerut) and other colleagues paid him rich tributes in Bulandshahr. In a late-night decision, chief minister Yogi Adityanath announced compensation of `40 lakhs for his widow and another `10 lakhs for his aged parents, and a government job for a member of the family.

Speaking in Ballia on Tuesday, BJP MLA Surendra Singh alleged the inspector was killed in police firing and denied any role of Bajrang Dal members in his death. Terming the incident “unfortunate”, the MLA said, however, that the police did not “murder” him deliberately.

Inspector Subodh Kumar Singh, who had initially probed the 2015 lynching of Mohammed Akhlaq, and a 20-year-old local man died of gunshot injuries on Monday as a rampaging mob protesting the alleged illegal cow slaughter torched a police post.

“I suspect that the inspector was killed by a bullet fired by the police. Bajrang Dal activists might have engaged in brickbatting but they did not open fire. They had not gone there with bullets,” the MLA told reporters in Ballia.

The MLA said the people indulged in stone-pelting but the police opened fire at them, and the inspector was hit by their gunshots. “The police did not murder him deliberately,” he said.

Twenty-seven people have been named in an FIR registered around 3 am following the violence on Monday, while cases have been lodged against 50 to 60 unidentified people, officials said.

Of the 27 named, at least four are workers and functionaries of right-wing organisations, including the Bajrang Dal.