India   All India  05 Dec 2018  PM latching on to Michel for smear campaign against Oppn: Congress
India, All India

PM latching on to Michel for smear campaign against Oppn: Congress

Prime Minister Modi and the BJP government were seeking to 'weave a web of lies', said Congress' Randeep Surjewala. 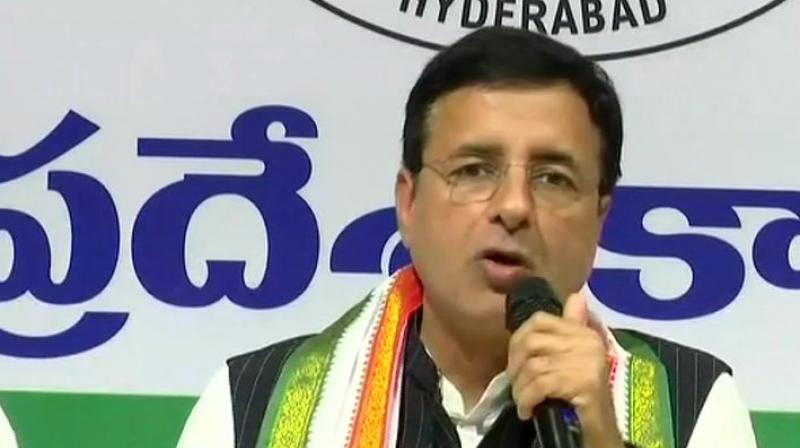 Surjewala accused the Modi government of indulging in a "cover-up conspiracy" to hide its role in helping and promoting the "banned company" AgustaWestland and its parent company, Finmeccanica. (Photo: ANI/Twitter)

Hyderabad: The Congress on Wednesday said the BJP and Prime Minister Narendra Modi were "latching" on to Christian Michel, the alleged middleman in the AgustaWestland chopper deal who was extradited to India from Dubai, for a "smear campaign" against opposition leaders.

Congress' chief spokesperson Randeep Surjewala, in a statement, alleged that facing "imminent defeat" in state polls, Prime Minister Modi and the BJP government were seeking to "weave a web of lies" and construct a "mesh of deception to hoodwink" the people of India in the chopper case.

In his rally in Rajasthan on the last day of campaigning before the state elections on Friday, Modi referred to the extradition of Michel saying, "The government has brought the middleman involved in a helicopter scam from Dubai. He served politicians and will now disclose secrets."

Surjewala accused the Modi government of indulging in a "cover-up conspiracy" to hide its role in helping and promoting the "banned company" AgustaWestland and its parent company, Finmeccanica.

"While the BJP and PM Modi are seeking fake credit without being subjected to investigation by the CBI for their own complicity and connivance, they are latching on to Christian Michel for committing a smear campaign against opposition leaders. The truth about Christian Michel is already out in the open," he claimed.

Surjewala alleged the statement made by Michel's advocate Rosemary Patrizi Dos Anjos after his detention in July had "clearly brought out" that the Modi government and its agencies were forcing him to sign a false confessional statement naming UPA chairperson Sonia Gandhi in return for complete exoneration from any charge whatsoever in the case.

Surjewala also said it was time that CBI investigated the prime minister for his alleged role in "exonerating" AgustaWestland and Finmeccanica instead of "weaving a fake story" to deflect attention from the "imminent defeat" in five states.

The ruling BJP had said Tuesday that the extradition in the case from the UPA era is a diplomatic victory for India and could spell "serious trouble" for the Congress's "first family", referring to Gandhi's.

It also asserted that the development was an unequivocal affirmation of the Modi government's "seriousness in fighting corruption".