The primary objective was to secure financial stability and health of global economy through coordination of economic policies. 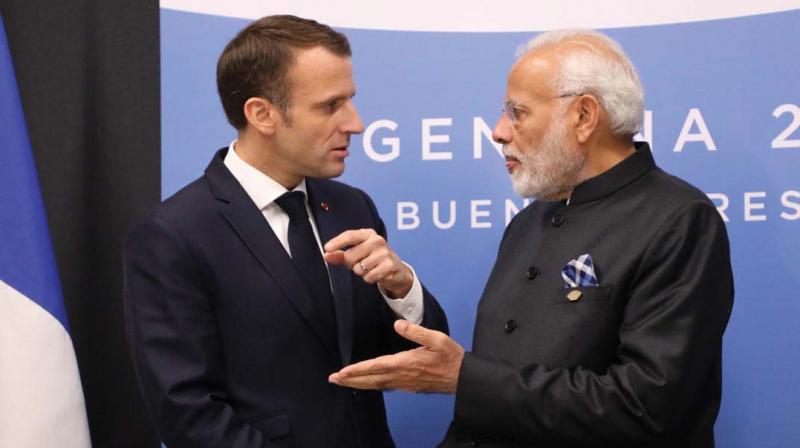 France’s President Emmanuel Macron and Prime Minister Narendra Modi speak during a bilateral meeting on the second day of the G-20 Leaders’ Summit in Buenos Aires on December 1, 2018. (Photo: AFP)

The primary objective was to secure financial stability and health of global economy through coordination of economic policies. While Paul Martin, who later served as the PM of Canada, is credited with conceiving the idea, US treasury secretary Lawrence Summers and Germany’s finance minister Hans Eichel were the key architects of transforming it into reality. Their respective deputies namely Timothy Geithner and Caio Koch-Weser picked up the members of G-20 at their discretion. After the financial crises of 2008, the level of discussion was raised to the summit of the heads of the state or government who have been meeting annually since 2011. The scope of the discussion of G-20, which has no headquarters and no secretariat and is run by a troika, the past chair, the current chair and the incoming chair, and has expanded over the years.

Now, besides the finance ministers and the heads of central banks, the ministers of foreign affairs, trade and agriculture and others also meet. Evidently, the G-20 accounting for 85 per cent of the world’s GDP; 80 per cent of world trade, two-third of the world’s population and half of landmass on the globe is an organisation with enormous political, financial and military resources capable of providing the global leadership. Alas, it doesn’t. Though it offers opportunities to leaders of feuding nations to meet on the sidelines and defuse tensions and explore prospects for accommodation.

Mr Trump played a Hamlet in wanting to meet or not meet Russian President Vladimir Putin. Neutral observers suspect his approach was more attributable to the investigations of Robert Mueller in Russian meddling in the last presidential election in the US and allegation that he was negotiating a business deal with Mr Putin when he was already a presidential candidate rather than to the Russian blockade of Crimean ships.

The G-20 has serious divisions. The US and the EU have imposed sanctions on Russia. Mr Trump threatens to increase the tariffs on Chinese exports worth $200 billion to 25 per cent after freezing the current level for 90 days (result of Donald Trump-Xi Jinping face-to-face meeting). It’s Countering America’s Adversaries Through Sanctions Act (CAATSA) against countries doing business with Iran and Russia impacts negatively on a host of friendly countries, including the EU and India.

French finance minister Bruno Le Maire had a harsh message for the US: “We refuse to negotiate with a gun to the head.” The US must rescind its tariffs on steel and aluminium imports before European countries discuss overhauling aspects of global trade. Mr Trump has no interest in the climate change agreement nor does he stand for globalisation. China continues to have territorial dispute with Japan. And India has serious reservations about China’s blind support to Pakistan and its role in Nepal, Sri Lanka and Maldives.

Narendra Modi has the distinction of attending two trilateral: the first with the US and Japan and the second with Russia and China. So, away from the dust of election campaign and the controversy surrounding the Rafale deal and revision of GDP rates under the UPA government, India was courted at the G-20 summit as never before. Obviously the US, Russia, China and Japan have contentious issues with each other but each the four wanted India on its side. Isn’t it the Non-Alignment Movement-2 though the NDA government won’t admit this publicly? Mr Modi underlined the win-win situation in Japan, America and India (JAI), but this trilateral causes some concern in China. The trilateral of Russia, India and China (RIC) after 12 years underlines the desire of Russia and China both target of Mr Trump’s tough talking to keep India on their side to counter American domination. The population and economic strengths of China, India, Russia’s defence prowess and nuclear arsenal and energy resources can make the RIC a powerful counterweight. They stressed the need for strengthening the WTO reforming the UN; this finds mention in the joint statement without any reference to American protectionism.

Mr Modi flagged his favourite public welfare schemes and the menace of terrorism. While Lalit Modi, Vijay Mallya, Nirav Modi and Mehul Choksi are sitting pretty abroad, Mr Modi’s nine-point plan for dealing with economic fugitives/offenders will be hailed on the election trail. He sought “cooperation in legal processes such as effective freezing of the proceeds of the crime, early return of offenders and efficient repatriation of the proceeds of the crime” and urged his counterparts not to offer safe havens to economic fugitives.

Mr Modi claimed that ties between India and China have “made huge strides” in the last one year. Xi Jinping was more circumspect, he said: “It was necessary for India and China to deepen pragmatic cooperation, expand bilateral trade, strengthen cooperation in investment, medical, poverty reduction, environmental protection...”

Mohammad Bin Salman, the Crown Prince of Saudi Arabia, emerged as the biggest beneficiary of the summit. He wasn’t treated as a pariah notwithstanding allegations about his involvement in the killing of Saudi Arabian journalist Jamal Khashoggi at the Saudi Consulate in Istanbul. Apparently, when chips are down, money and oil matter more than idealistic rhetoric. Mr Trump doesn’t want to lose contracts worth $110 billion and Mr Modi wanted to secure supply of Saudi oil to make do for the reduced imports from Iran.

The writer is a former diplomat