The officer said the Army, Navy, and the Border Security Force (BSF) have been alerted in the view of the cyclone’s landfall. 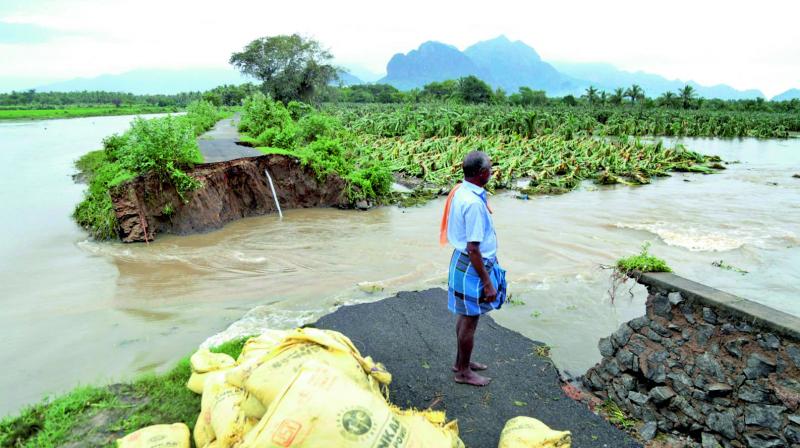 A man watches a road that has been cut off due to floods following heavy rainfall caused by the cyclone Ockhi in the Kanyakumari district. (Photo: PTI)

Ahmedabad: After leaving a trail of destruction in the southern coast, Cyclone Ockhi is expected to make landfall in coastal Gujarat Tuesday midnight with squally winds, which may cause heavy rains in several parts of the state during the next two days.

An India Meteoro-logical Department (IMD) forecast said, “The severe cyclonic storm Ockhi is now laid centred about 850 km south-southwest of Surat and is likely to cross south Gujarat and adjoining north Maharashtra coasts near Surat as a deep depression by midnight of December 5.”

Following the IMD prediction, Gujarat chief secretary J.N. Singh on Monday took stock of the administrative preparedness to deal with any eventuality.

Revenue department’s principal secretary Pankaj Kumar told reporters in Gandhinagar that the authorities concer-ned in the coastal region of the state have been directed to take all precautionary measures.

Two National Disaster Response Force (NDRF) teams each have been deployed at Surat, Navsari, and Rajkot.

The officer said the Army, Navy, and the Border Security Force (BSF) have been alerted in the view of the cyclone’s landfall.

“According to the IMD forecast, Cyclone Ockhi would enter south Guja-rat Tuesday midnight. This will the impact coastal areas from Um-argam (in south Guja-rat) till Gir Somnath district (in Saurashtra).

Meanwhile, the Maharashtra government has declared a holiday for schools and colleges in Mumbai and adjoining districts on Tuesday due to “serious weather predictions” in view of Cyclone Ockhi.

An official at the Mumbai office of IMD said on account of the cyclone, the megapolis has started receiving rainfall due to spread of clouds.

The disaster management unit of Brihanm-umbai Municipal Corporation has issued an advisory against visiting beaches in view of the high tide alert issued.