Joint Secretary in the ministry Sanjeev Kumar Jindal also said the cyclone is slowing down and would have no impact in Gujarat. 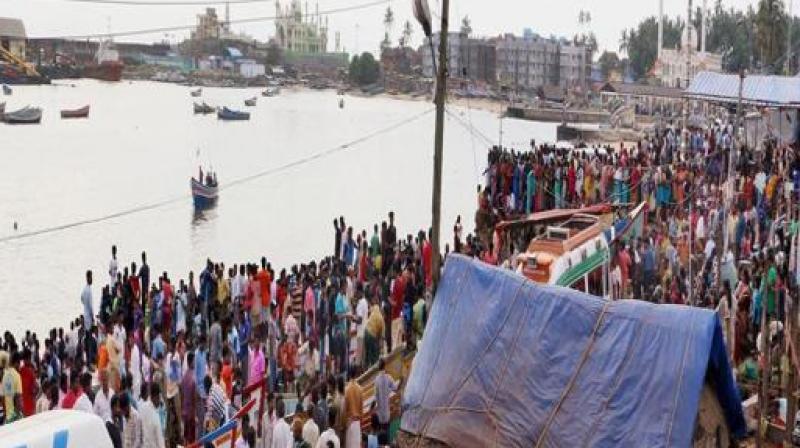 Altogether 809 fishermen with their boats from Tamil Nadu and Kerala were swept away and reached Maharashtra coast where they were provided food and shelter. (Photo: PTI)

New Delhi: As many as 39 people have perished and 167 fishermen were still missing after Cyclone Ockhi hit Tamil Nadu and Kerala coasts while 809 others were swept away to Maharashtra, the Union Home Ministry said on Tuesday.

Joint Secretary in the ministry Sanjeev Kumar Jindal also said the cyclone is slowing down and would have no impact in Gujarat, where the first of the two-phased assembly elections is due four days later.

A total of 556 fishermen were also rescued by relief and rescue teams from seas.

The state governments are verifying with the affected villages to find the exact number of missing fishermen.

Altogether 809 fishermen with their boats from Tamil Nadu and Kerala were swept away and reached Maharashtra coast where they were provided food and shelter.

While 33 tourists, both domestic and foreign, were safe in Lakshadweep, 250 fishermen could also reach safely in the islands from the high seas after being hit by the cyclone.

Jindal said two merchant ships with eight sailors each were rescued and brought to Lakshadweep by Navy and Coast guard teams.

Asked whether the cyclone would affect the election process in Gujarat, Jindal said there was no such possibilities as it has already slowed down.

Meanwhile, the National Disaster Management Authority (NDMA) today asked fishermen in both eastern and western coasts not to venture out in the sea for the next three days as heavy rainfall is expected in many areas due to cyclone Ockhi.

Fishermen living along and off South Gujarat and North Maharashtra coasts have been advised not to venture into the sea till Tuesday morning.

It is very likely that the cyclone will to continue to move north-northeastwards, weaken gradually and cross south Gujarat and adjoining north Maharashtra coasts near Surat as a deep depression by Tuesday night.

The NDMA predicted formation of a depression over southeast Bay of Bengal during the next few hours and it will further intensify into a deep depression during subsequent two days.

It is very likely to move west-northwestwards towards north Tamil Nadu, south Andhra Pradesh coasts during next three days.

The NDMA said people when asked to evacuate, should move to a designate cyclone shelter with safety kit and store dry food and water in abundance, keep torch and hurricane lantern/emergency light handy and keep listening to battery operated radio for latest information.