The ruling BJD said it was a security protocol and no women have lodged any complaint. 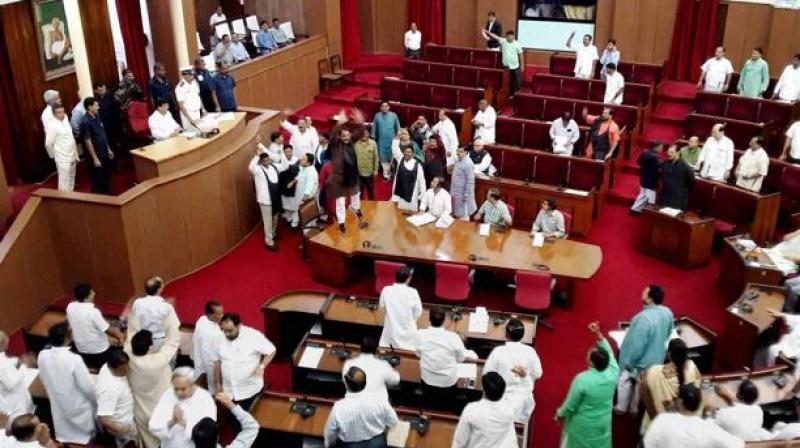 The Odisha Assembly on Monday witnessed pandemonium over alleged dishonour of women protesters, whose black stoles were removed by police. (Photo: PTI/Representational)

Bhubaneswar: The Odisha Assembly on Monday witnessed pandemonium and repeated adjournments over alleged dishonour of women protesters, whose black stoles were removed by police, before allowing them entry into Chief Minister Naveen Patnaik's meeting venue at Sundergarh district.

Opposition Congress and BJP members demanded unconditional apology from the Chief Minister for the 'disgrace' meted out to the women, while ruling BJD said it was a security protocol and no women have lodged any complaint.

As soon as the House assembled for the Question Hour, Congress and BJP members rushed to well and raised slogan against Patnaik holding him responsible for the incident. Some of the Congress members also attempted to climb the Speaker's podium and break the mike.

Unable to run the proceedings, Speaker Niranjan Pujari first adjourned the House till 3 PM. As the din continued when the House reassembled, the Speaker announced another adjournment and called an all-party meeting by suspending business of the House for 30 minutes.

"The police harassed the women participants at a rally in the name of CM's security yesterday. This is really painful and unfortunate. The Chief Minister should apologise for showing disrespect to women," Leader of Opposition Narasingh Mishra of Congress said.

Opposition chief whip Tara Prasad Bahinipati said, "The Chief Minister, who claimed to have great respect for women, has insulted the mothers at his rally. The women wearing black sarees were not allowed entry into Patnaik's meeting. The CM should beg unconditional apology."

Drawing a parallel between disrobing of Droupadi in Mahabharata and forceful removal of black stoles of women at the meeting, BJP's Pradip Purohit said it was evident that the government was afraid of black clothes' flags.

"The party activists would stage agitation in all the 314 blocks and urban areas tomorrow protesting against dishonour of women at Patnaik's meeting," state party president Basant Panda said.

The ruling BJD, however, accused the opposition of making an issue out of nothing.

"No woman has made any complaint so far. Police were performing their duty for VVIP security as per protocol. Opposition parties have no issues to raise in House," MLA and BJD spokesperson Dibyasankar Mishra said.

"The incident did not take place under CM's direction. The local administration decides about CM's security during his visit," said BJD MLA Amar Prasad Satpathy.