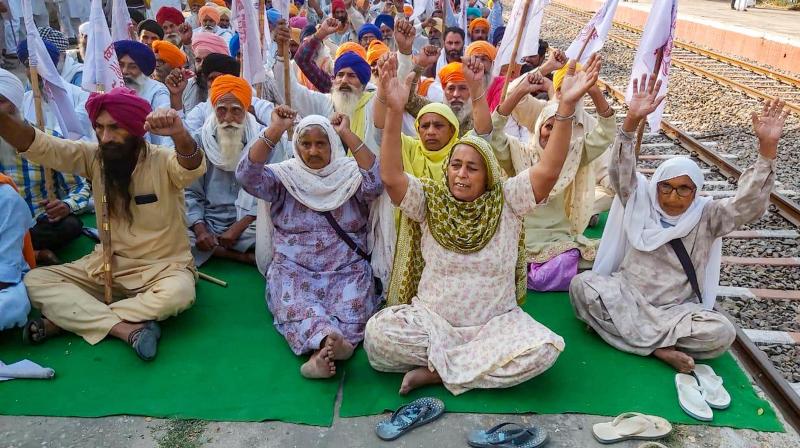 Chandigarh: Farmers in Punjab and Haryana on Thursday put up road blockades at many places as part of a nationwide 'chakka jam' agitation in protest against three central farm laws, and demanded that these be withdrawn.

The call for the nationwide 'chakka jam' from 12 noon to 4 pm was given by the All India Kisan Sangharsh Coordination Committee.

Though police authorities diverted traffic at many places, yet the commuters faced traffic snarls.

Farmers slammed the BJP-led government at the Centre for bringing the "black laws" and expressed fear that these legislations would destroy the farming community and would only "benefit" big corporate houses.

Punjab farmers' bodies also lashed out at the Centre for suspending goods trains in the state that has affected supply of coal, fertiliser and other essential items.

BKU (Charuni) president Gurnam Singh said they have planned to hold protests at around 20 places in Haryana, including Karnal, Rohtak, Kaithal, Jind, Hisar and Fatehabad.

A protesting farmer in Bathinda said the Narendra Modi government wanted to "defame and derail" farmers' protest by suspending goods trains in the state.

The railways has suspended the operation of freight trains in the wake of blockade of some rail tracks by farmers in protest against the three central farm laws.

Farmers' bodies protesting against three central farm laws have expressed apprehension that the new laws would pave the way for the dismantling of the minimum support price system, leaving them at the "mercy" of big corporate entities. They demanded that these be withdrawn.

The three farm laws -- the Farmers' Produce Trade and Commerce (Promotion and Facilitation) Act, the Farmers (Empowerment and Protection) Agreement of Price Assurance and Farm Services Act and the Essential Commodities (Amendment) Act, 2020 -- were enacted recently.

The Centre has asserted that these new laws will be beneficial for farmers and will increase their income.