'There is no question of leaving their hands. We are with them,' KS Eshwarappa said. 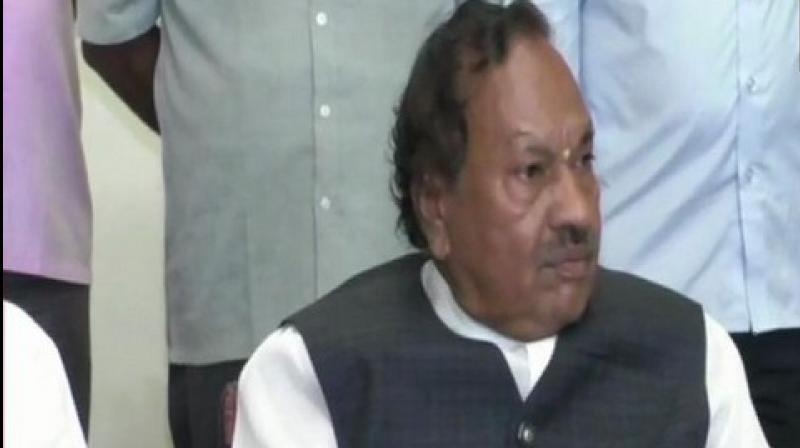 The Rural Development Minister said the disqualified MLAs were to be credited with the formation of the BJP government in the state. (Photo: ANI)

Koppal: After Chief Minister BS Yediyurappa denied any links with the 17 disqualified MLAs, his cabinet colleague KS Eshwarappa on Monday said BJP came to power in Karnataka due to the legislators and they will not be left behind.

Speaking to reporters here, the Rural Development Minister said the disqualified MLAs were to be credited with the formation of the BJP government in the state.

"The MLAs who resigned from the Assembly are the reason behind the government formation and I am sitting in front of you as a minister. There is no question of leaving their hands. We are with them," he said.

Earlier on Monday, Yediyurappa said that BJP had nothing to do with the 17 Congress-JD(S) MLAs, whose resignation had led to the collapse of HD Kumaraswamy government in July this year. The 17 MLAs were disqualified in July by then Karnataka Assembly speaker Ramesh Kumar and were barred from contesting polls for the duration of the assembly which ends in 2023.

"We don't have anything to do with the 17 disqualified MLAs," the Chief Minister had said while speaking to media about a purported videotape of him pertaining to resignations of the MLAs.

He had said, "We don't even know which party they are going to join or will they contest independently. The Congress party is twisting my statement. Let the Supreme Court take a decision on the videotape."

In the clip which surfaced on social media, Yediyurappa purportedly said that the decision of the 17 Congress and JD(S) MLAs to resign was taken by the Central leadership of the BJP and its workers should honour the "sacrifice" of the rebel MLAs.