Many top businessmen and heads of Indian organisations attended the public event, and the Prime Minister posed for pictures with them. 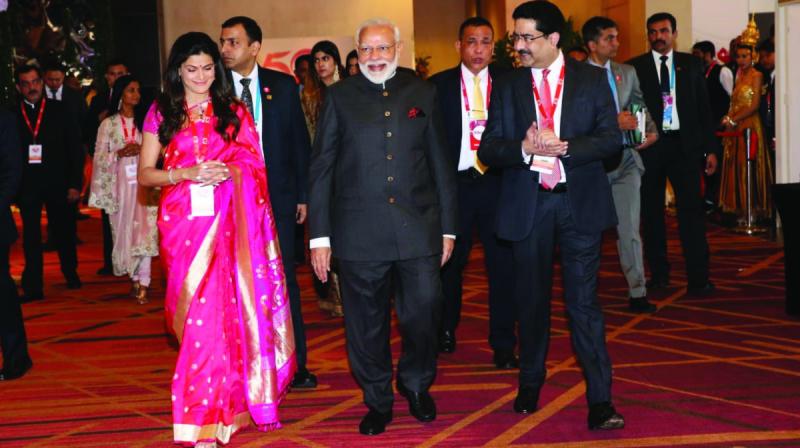 Bangkok: Indian Prime Minister Narendra Modi had plenty to do at the 35th Asean Summit, with his participation in the 16th Asean-India Summit, the 14th East Asia Summit, and the 3rd RCEP Summit.

As Indian ambassador, Suchitra Durai said, “Engagement with Asean is a key pillar of India’s foreign policy and at the core of India’s ‘Act East’ policy.”

Indian Prime Minister Narendra Modi said this, and much more, at two dynamic but totally diverse events that he attended involving the Indian community in Bangkok.

The first was a public rally at the Nimibutr Indoor Stadium called “Sawasdee, PM Modi” on the lines of the “Howdi, Modi” rally at Texas, US, in September. More than 23 Indian diaspora organisations got together to put together the mega event in less than three weeks, according to Atul Jogani, who spearheaded the entire event, which attracted more than 6,000 people.

The two-hour entertainment programme included dances from almost every part of India, and included many professionals who gave up their office hours to practice for the event. This included Trina from Kolkata, who runs an IT solutions company with a turnover of $4 million and a staff of 160, who said the Narendra Modi rally was a very special event.

It was fascinating to see the frenzy among the multi-lingual audience when songs like Vande Mataram and Saare Jahan se acha were sung. Wearing orange scarves, tri-coloured caps, waving Indian flags, there was a spirit of fervent patriotism that was fascinating to watch.

The enthusiastic, vociferous audience included professionals, academics, traders, and one also noticed the head priest of a well-known Indian temple!

They all roared with delight as PM Narendra Modi entered the stadium. In fact, there were rock concert-like atmospherics in the stadium, as they happily shouted “Modi, Modi” and often interrupted his speech.

In his speech, Mr Modi spoke easily and eloquently of his government’s achievements in numerous fields — sanitation, cheap medicare, tax reductions, improvement in women’s positions and reduction in carbon emissions. He made the important announcement that a thousand scholarships to do a doctorate in the top IITS of India were being offered to students from Asean countries, and urged the audience to tell their friends about it.

Speaking of India’s link with Thailand, he said it was very deep, due to many reasons — geographical proximity, easy connectivity, religious commonality through Lord Ram and the Buddha, He was sure that “trade, tradition, tourism” would decisively bind them together. Mr Modi also spoke with admiration about the Indophile Thai Princess, Maha Chakri Sirindhorn, who is a scholar of Sanskrit, and who was awarded the Padma Bhushan by the Indian government.

With his characteristic aim to mobilise the overseas Indian community, he stated that that every one of them had a “role” to play. “As long as you are Indian, Bharat will be within you,” Mr Modi declared, to thunderous applause. 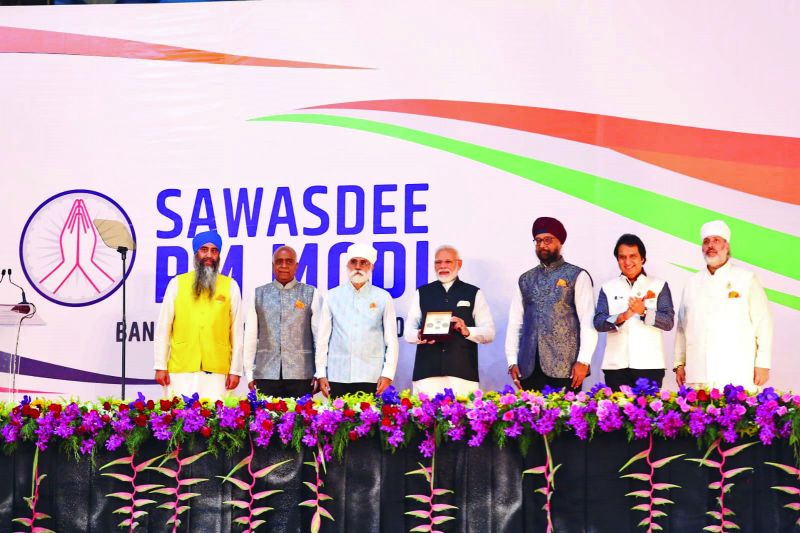 Many top businessmen and heads of Indian organisations attended the public event, and the Prime Minister posed for pictures with them.

Mr Modi also released a silver coin made from the Thai mint to commemorate Guru Nanak’s 550th anniversary, stating that the leader was not just for Sikhs but for all religions.

Another unique gesture was to release the Thai version of the famed Tamil classic Thirukural by the great writer Thiruvalluvar, a book which he said was still valid today, even though it was written 2,000 years ago. In fact, Mr Modi said he was proud to have released the Gujarati version of the book too!

While this public rally was loud, lively and energetic, the next event which the Prime Minster attended was quiet, stately, lavish — the Golden Jubilee Celebrations of the Aditya Birla Group in Thailand.

The group is the biggest business group in the country, with a turnover of $2 billion and a staff of nearly 4,000, but when Aditya Birla came to Thailand a half-century back, to start an overseas venture, he had to literally start from scratch. His fascinating story and “powerful vision” were marvellously captured on screen, and later recounted by his son and current chairman of the group, Kumar Mangalam Birla.

He described his father, as “the first Indian to invest overseas”, which today had companies in as many as 30 countries and six continents, with an investment of $48 billion and as many as 120,000 employees.

Many of the Aditya Birla Group’s business partners attended the event at the mega Centara Grand and Bangkok Convention Centre, the city’s biggest convention venue, with as many as a thousand invited guests. The Golden Jubilee event included magnificent cultural entertainment by artistes from India, commemorative plaques to the group’s important suppliers and bankers, and most important, the keynote address by Indian Prime Minster Narendra Modi.

While welcoming him, Kumar Mangalam Birla waxed eloquent about “India’s most respected and iconic leader”. It was a speech that accorded the highest of accolades to Mr Modi, “His journey has been defined by four hallmark traits — bold ambition, swift and decisive execution, an inclusive vision and uncompromising ethics”. He said that these were qualities that his own business group followed.

Mr Birla’s last line brought resounding applause, “I sometimes wonder what it takes to bring this scale of change in a country of 1.3 billion people. And, then I realise, Modi hai to mumkin hai! Everything is possible with Modi!”

The Indian Prime Minister responded by giving a speech in English, and like at the public rally, listed out his government’s impressive achievements.

“This is the best time to be in India!” declared Mr Modi, as he spelt out India’s upsurge in numerous global indexes. “Many things are rising, and many things are falling,” he informed. “Rising” included “ease of business, ease of living, productivity, pace of infrastructure.” “Falling” included “tax rates, red tapeism, cronyism, corruption!”

“Things which were impossible once, are now possible,” said the Indian Prime Minister with pride, as he welcomed his large and distinguished business audience to invest to in India.

“We are pursuing our dream of an economy of $5 trillion within five years,” Mr Modi declared, with pride and confidence.