In anticipation of protests, prohibitory orders have been issued for the base towns of Pamba, Nilakkal, Erumeli and Elavunkal. 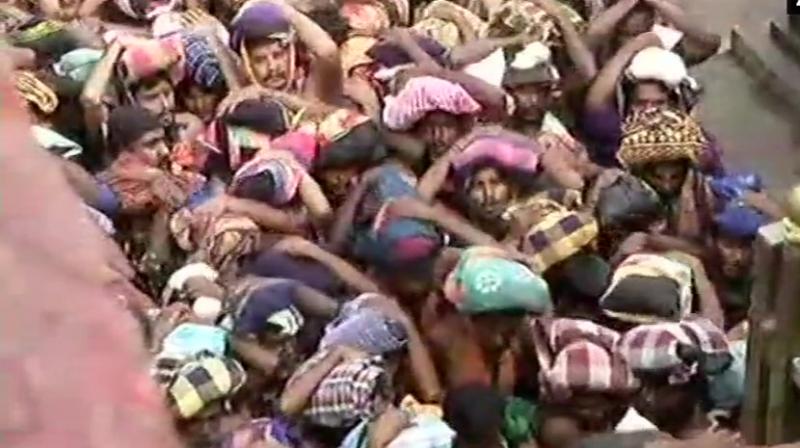 Thiruvanathapuram: Amid tight security, Sabarimala temple was opened today for the public for two days for the special 'Athazha Puja’. A large number of devotees thronged the temple to worship Lord Ayappa.

The reopening of the gates of temple comes just weeks after violent protests against the entry of women of menstruating age hit the shrine.

In anticipation of protests, prohibitory orders were issued for the base towns of Pamba, Nilakkal, Erumeli and Elavunkal. The temple has been turned into a virtual fortress with around 2,300 personnel, including a 20-member commando team and 100 women personnel, been deployed to ensure smooth ‘darshan’ and security of devotees.

The Kerala police has also installed mobile jammers near the Lord Ayappa temple to prevent the 'tantri' and other shrine officials from interacting with the media and to dissuade live visuals.

According to reports, the temple has witnessed more crowds than usual this year as compared to the same day in previous years.

This is the second time that the temple has opened after the Supreme Court allowed women of all ages to enter the shrine.

The temple opened at 5 pm today for a special puja due tomorrow and will close at 10 pm after it.

The "Sree Chitira Atta Thirunal" puja slated for Tuesday, marks the birthday of the last king of the princely state of Travancore, Chithira Thirunal Balarama Varma.