Rahul Gandhi alleged 'chowkidaar' has made his intentions clear that 'he will steal from others to fill the coffers of his friends'. 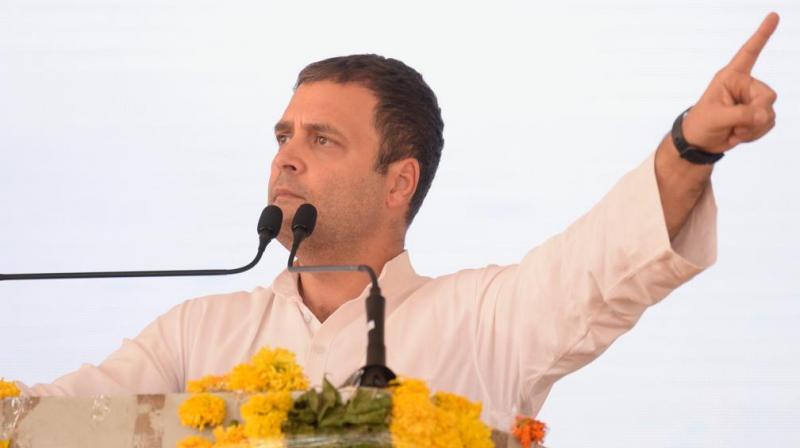 Taking to Twitter, Rahul Gandhi alleged the motive of the crop scheme is to fill the accounts of 'suit-boot friends' with thousands of crores of rupees. (Photo: File | @INCIndia twitter)

New Delhi: Congress president Rahul Gandhi on Monday attacked Prime Minister Narendra Modi over the crop insurance scheme, alleging that farmers are being "looted" and the 'chowkidaar' has made his intentions clear that "he will steal from others to fill the coffers of his friends".

Taking to Twitter, he alleged the motive of the scheme is to fill the accounts of "suit-boot friends" with thousands of crores of rupees. There was no immediate reaction from the government over the allegations.

"After 'looting' Air Force in Rafale, now farmers are being looted in the name of crop insurance. The motive is only one: filling thousands of crores of Rupees in the accounts of their suited-booted friends. The chowkidaar has made his intentions clear: Will steal from others to fill the coffers of friends," Gandhi tweeted in Hindi.

During his campaign speeches, PM Modi had said that he would be a 'chowkidaar' (watchman) of government treasury and would not allow anyone to misuse public money.

Rahul Gandhi cited a media report quoting a senior journalist who alleged that the government's crop insurance scheme is a "bigger scam" than Rafale.

The Congress has questioned the Modi government's crop insurance scheme, alleging that the compensation to farmers is far less than the premium taken from them by the private players.