India   All India  05 Nov 2018  Order probe into Avni's killing if you want: Maharashtra forest minister to Maneka
India, All India

Order probe into Avni's killing if you want: Maharashtra forest minister to Maneka

Mungantiwar's statement comes a day after Maneka Gandhi lashed out at Maharashtra government over the 'ghastly murder' of the tigress. 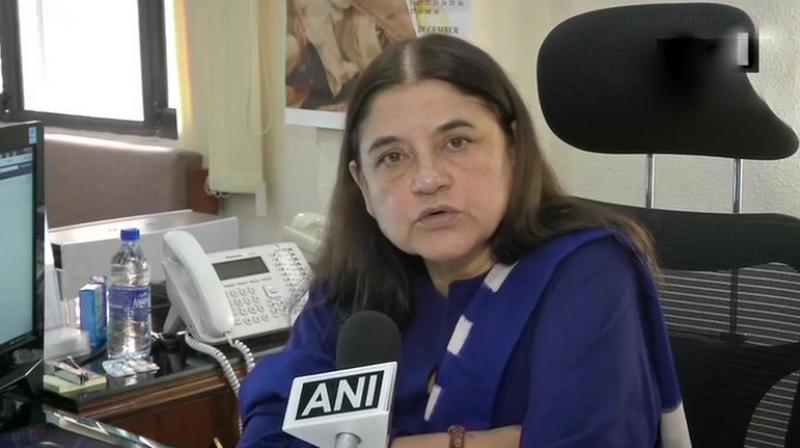 The Union minister had said she is going to take up the matter 'very strongly' with Maharashtra Chief Minister Devendra Fadnavis. (Photo: File)

Mumbai: Maharashtra Forest Minister Sudhir Mungantiwar Monday took strong objection to Union minister Maneka Gandhi's criticism of the state government over the killing of a tigress called Avni, saying she "lacks information" on the issue and can order a high-level probe if she wants to.

Mungantiwar's statement comes a day after the Union Women and Child Development minister lashed out at the Maharashtra government over the "ghastly murder" of the tigress, T1, as she was known officially, calling it a "straight case of crime".

The tigress, survived by her two 10 months old cubs, was believed to be responsible for the deaths of 13 people in the past two years. She was shot dead by sharp-shooter Asgar Ali in the Borati forest in Maharashtra's Yavatmal district Friday as part of an operation.

In a series of tweets, Gandhi had stated, "It is nothing but a straight case of crime. Despite several requests from many stakeholders, (Sudhir) Mungantiwar, Minister for Forests, Maharashtra, gave orders for the killing." The Union minister had said she is going to take up the matter "very strongly" with Maharashtra Chief Minister Devendra Fadnavis. Talking to PTI, Mungantiwar said Gandhi's criticism "stems from her lack of information" on the issue and asserted neither he, as a minister, nor any of the secretaries in his department have the right to order such killings.

Such decisions are taken as per the guidelines of the National Tiger Conservation Authority (NTCA), he said.

"She (Gandhi) loves animals. She is, however, Minister for Women and Child Development. I have to consider the women who have been killed by the tigress," Mungantiwar said.

If she deems fit, she can suggest changes in the NTCA guidelines, the senior state minister said. Both Mungantiwar and Gandhi are members of the Bharatiya Janata Party. The Maharashtra minister said orders to capture the tigress were given when she killed five people.

However, he said animal activists approached the Bombay High Court and obtained a stay, which resulted in the "man-eating" big cat killing more people. "The Forest Department is not an enemy of the tigress. She was killed only after she attacked those trying to tranquilise her," Mungantiwar said.

He said if sharp-shooter Asgar Ali has criminal cases registered against him, then Gandhi, being a Union minister, can order his arrest.

Meanwhile, seizing the opportunity arising out of war of words between the two BJP ministers, the Shiv Sena took a dig at the Fadnavis government over the tigress's killing.

The BJP's bickering ally said Yavatmal district, where the tigress was killed, has also seen a spate of farmers suicide. Recently, several cultivators in the district in Vidarbha region lost their lives due to inhalation of toxic pesticides, but no one was punished, the Uddhav Thackeray-led party said. "We have not seen those responsible for the deaths (of farmers) get any punishment like the tigress was punished for killing people," the Sena said in an editorial in party mouthpiece 'Saamana'.

The Marathi daily said people in the state are dying due to lack of water, malnutrition, government policies and debt traps but the administration has never been termed a "carnivore".