Manmade disasters coupled with the state governments inaction have rendered the state a deadly graveyard for the elephants. 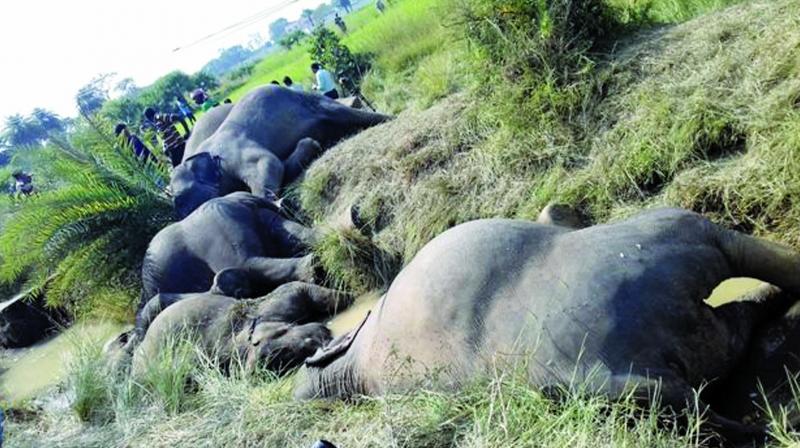 Since May 2017, 121 wild elephants have died in Odisha. Out of these, 25 were electrocuted and 4 died after they fell into wells.

The death of seven elephants on October 27 at Kamalanga in Dhenkanal district of Odisha due to electrocution has allegedly exposed the state government’s apathy and inaction to ensure safe habitats for the big mammals.

Bhubaneswar: Odisha, the eastern Indian province whose rulers in the past were known as the Gajapati Maharajas or rulers of the elephants, is no longer a safe place for the jumbo animals. It was the state which boasted of having the countrys highest number of pachyderms.

Manmade disasters coupled with the state governments inaction have rendered the state a deadly graveyard for the elephants.

Since May 2017, 121 wild elephants have died. Of them, 25 were electrocuted either by sagging power lines or hooking of live wires by poachers.

The death of seven elephants at Kamalanga in Dhenkanal district on October 27 has exposed the state governments “apathy” and “inaction” to ensure safe habitats for the big mammals. This mass electrocution, said to the biggest-ever electrocution tragedy in India, has shaken the wildlife lovers and conservationists across the world.

In fact, the National Green Tribunal has taken the Kamalanga incident seriously and slapped a suo motu case against the Central Electricity Supply Utility (CESU) of Odisha. Besides, it has imposed a penalty of Rs 1 crore on the power distribution company for its alleged negligence that led to the death of seven elephants.

Wildlife activists have blamed the present forest and environment minister Bijayashree Routray for the tragedy and registered their protest at the office of the chief minister.

“Our state Odisha, known for its magnificent elephants, has turned into a graveyard for elephants. We wish to record our disappointment over the worrying performance of the current minister. Since May 2017 when he (minister Bijayshree Routray) took over charge, we are dismayed to note that 121 wild elephants have died. In a similar incident on the June 9, 2017, bodies of three electrocuted elephants were recovered in decomposed conditions near Borapada in Dhenkanal district,” Biswajit Mohanty, secretary of Wildlife Society of Odisha, wrote to chief minister Naveen Patnaik.

There are hundreds of sagging electric line points where a similar tragedy is imminent.

In a ghastly incident on April 16 this year, four elephants were mowed down by a train near Telidihi in Jharsuguda district due to poor coordination. No enquiry was conducted to ascertain the role of the local divisional forest officer (DFO), but lower level forest staff members were suspended.

Earlier on July 29, 2917, a train had killed an elephant in Sundargarh district followed by one more case of an elephant hit by a train in Dhenkanal on April 21 this year.

“Had the minister taken up this matter seriously, these elephants would be alive today,” said Mr Mohanty.

Wildlife protection activists find lack of coordination between the forest officials and the railways to check accidental deaths of the elephants.

Another shocking fact is that the poaching of adult male elephants for ivory continues unabated in Odisha with nothing being done to check the poachers.

In February 2018, in quick succession, two adult male elephants were found with their tusks hacked off by poachers in the Badamba range of Athagarh division. On October 17, another adult male died in the adjoining Narsinghpur East range.

In December 2017, two professional elephant poachers from Arunachal Pradesh were apprehended in Keonjhar, but there has been no headway in the investigation to uncover the network. Odisha has lost 28 adult male elephants during the tenure of this minister which is a huge loss considering the fact that these were breeding males.

Open wells continue to be a threat to elephants and other wildlife. Since May 2017, 44 wild animals have fallen into open wells. There were 15 elephants among them, of which four died.

Human-elephant conflict has also gone up sharply in the last 18 months. As many as 141 men and women were killed and 102 injured in this turmoil.

During 2017-18, Odisha recorded the unfortunate death of 84 humans, the highest till date. For the last seven months, 57 persons have died and 53 have been injured.

The disbursement of compassionate payments for crop damage has continued to be woeful despite the Odisha Right to Services Act of 2012.