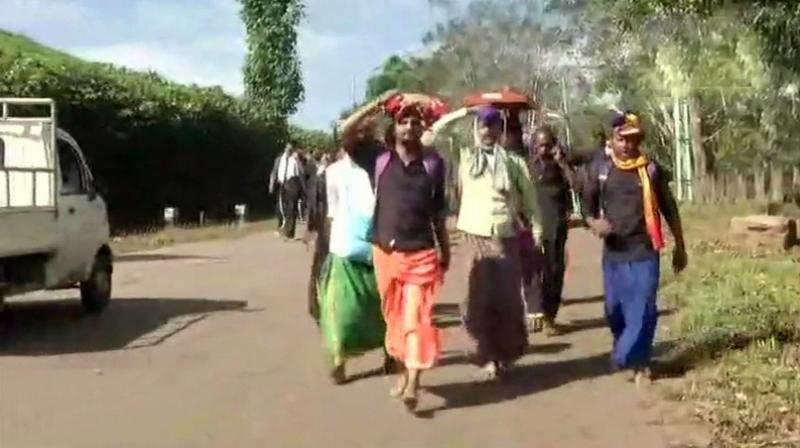 Devotees were seen trekking up the hill while chanting hymns in praise of the deity. (Photo: ANI)

Nilakkal (Kerala): Amid tight security, devotees of Lord Ayyappa on Monday began the trek from Nilakkal base camp to the hill shrine of Sabarimala ahead of the temple's opening this evening.

Devotees were seen trekking up the hill while chanting hymns in praise of the deity.

After the special 'Athazha Puja', the temple will be closed on Tuesday evening.

Nilakkal base camp in-charge Manjunath H told news agency ANI, "There is adequate police deployment here. We are not restricting the movement of devotees."

In the wake of violent protests during the last month’s ‘puja’, the state police have issued prohibitory orders at Pamba, Nilakkal and other areas near the shrine and are maintaining vigil on vehicles going towards the temple.

The Pathanamthitta district administration has imposed Section 144 in Sannidhanam, Pamba, Nilakkal, and Elavunkal till November 6.

Section 144 of the Criminal Procedure Code (CrPC) prohibits assembly of five or more people in an area. Every member of such an "unlawful assembly" can be booked for "engaging in rioting", the maximum punishment for which is three years.

The Sabarimala temple and its surrounding areas witnessed a series of protests in October over the Supreme Court’s decision to quash restrictions on the entry of women between the ages of 10 and 50 into the holy shrine.

Despite the top court's order, no women in the menstruating age were able to enter the sanctum sanctorum of the temple when it opened last time.

More than 3,000 protesters have been arrested so far for instigating the violence that broke out in the state, while around 529 cases have been registered.