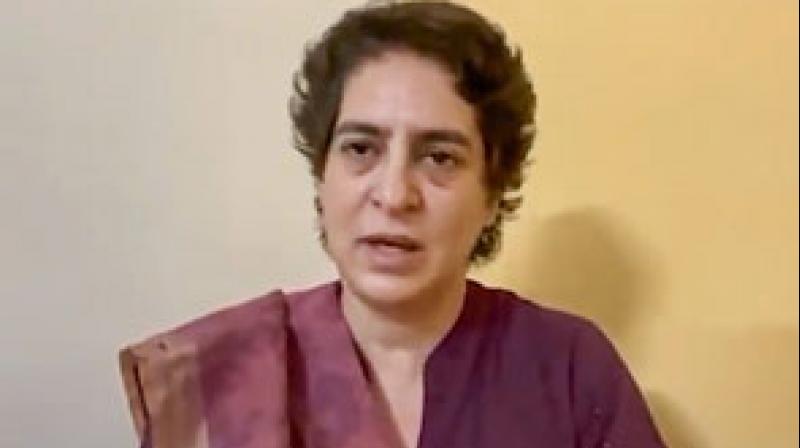 Congress General Secretary Priyanka Gandhi Vadra, who has been detained in Uttar Pradesh's Sitapur while on her way to visit violence-hit Lakhimpur district, speaks to the media virtually. (PTI Photo)

Sitapur: Why has the person behind the killing of four farmers in Lakhimpur Kheri not been arrested while she has been under detention for 28 hours without an FIR, Congress leader Priyanka Gandhi asked on Tuesday as her colleagues alleged that she was not being allowed to meet her lawyers. Priyanka Gandhi and other Congress leaders have been in detention beyond 24 hours and a drone camera deployed over the 2nd Battalion PAC guesthouse in Sitapur where they have been kept, Congress office-bearers claimed.

"She is not being allowed to meet her lawyers and the administration is not telling her reasons for her detention," Congress media and communication vice chairperson Pankaj Srivastava said.

The Congress general secretary was detained in Sitapur on Monday on her way to Lakhimpur Kheri, where eight people died and several others were injured on Sunday in the bloodiest clash since the farmers' protest over the Centre's agri laws began last year. On Tuesday, she shared a video on Twitter purportedly showing a group of protesting farmers being mowed down by an SUV. "@narendramodi ji your government has detained me for the past 28 hours without any order or FIR. Why the person who ran over farmers has not been arrested yet?" she said in a tweet in Hindi. Her party colleague Gurjar shared another video on the microblogging site showing a drone, which he claimed was flying above the guesthouse where Congress leaders have been detained. The government is so scared of Priyanka Gandhi that even after keeping her under detention, it is using a drone to keep an eye on her, he tweeted in Hindi.

As several Congress leaders took to social media, party workers staged demonstrations till late Monday night and slept on the pavement outside the PAC battalion complex.

The crowd of Congress workers and supporters was thin on Tuesday morning but started to swell after 10 am as more party activists from all over the state thronged Sitapur and occupied all hotels in the vicinity. District officials said the law and order situation was in control. According to Srivastava, the illegal detention of party leaders has led to anger among Congress workers. "The prime minister is coming for a celebration in Lucknow while the farmers of Lakhimpur are waiting for justice," he added. Prime Minister Narendra Modi was in Lucknow on Tuesday to inaugurate a programme of the 'Azadi ka Amrut Mahotsav' celebrations. Four of the eight dead in Sunday's violence were farmers, allegedly knocked down by vehicles driven by BJP workers travelling to welcome Uttar Pradesh Deputy Chief Minister Keshav Prasad Maurya to an event in the area. The others were identified as BJP workers and their driver, allegedly pulled out of the vehicles and then lynched by the protesters. The Uttar Pradesh Police has lodged a case against Union minister Ajay Mishra's son Ashish but no arrest has been made so far.