The chief minister said it is not the first time that accusations of corruption in ticket distribution in the Congress have been made. 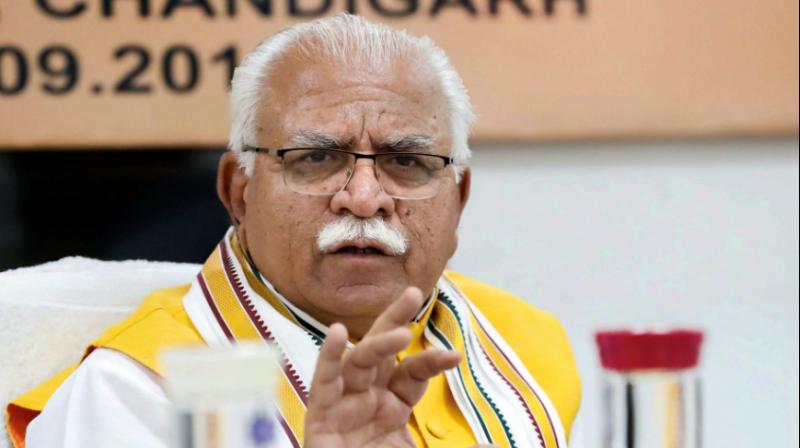 'Had the BJP invited him (Tanwar), he would have come by now,' the chief minister said. (Photo: PTI)

Khattar slammed the opposition Congress, saying Tanwar's allegations of irregularities in ticket allotment have exposed the party and asserted only those people who have a "clean past" and "carry no baggage" will be allowed to join the BJP.

We will not give him (Tanwar) entry (into BJP), he told reporters here. Asked about Tanwar's reported remarks that the BJP had invited him, Khattar said it was completely wrong.

"Had the BJP invited him (Tanwar), he would have come by now," the chief minister said.

He was speaking after Tanwar resigned from the primary membership of the Congress on Saturday, in a setback to the party ahead of October 21 Assembly polls.

The former MP announced his resignation on Twitter and posted a four-page resignation letter addressed to Congress president Sonia Gandhi. "Nothing works in Congress without money. The former state president (Tanwar) made such an allegation. I will say Congress has been exposed, said Khattar.

The chief minister said it is not the first time that accusations of corruption in ticket distribution in the Congress have been made.

"Earlier also, it used to happen there (Congress). Now people and leaders have understood that they should not remain in such a party. A lot of their people are contacting us and we are saying that we will take people whose past is clean and who face no allegation and carry no baggage, Khattar said.

There is "no trust" between the Congress leaders and workers and because of this the party is in such a "bad situation, he added.

Tanwar's resignation came days after he along with his supporters protested outside Sonia Gandhi's residence in Delhi over alleged irregularities in ticket distribution. He had then resigned from all election committees of the party.

Tanwar, who was considered close to Rahul Gandhi and had been state unit chief since 2014, was unhappy after the party last month replaced him with Kumari Selja, while his bete noire Bhupender Singh Hooda was appointed chairperson of the election management committee.

Tanwar had said that the Congress in Haryana had turned into "Hooda Congress" as those who worked against the party's interests during the last five years had been given prominence.