On Thursday, Hasina said she was satisfied with Prime Minister Narendra Modi’s assurance on NRC. 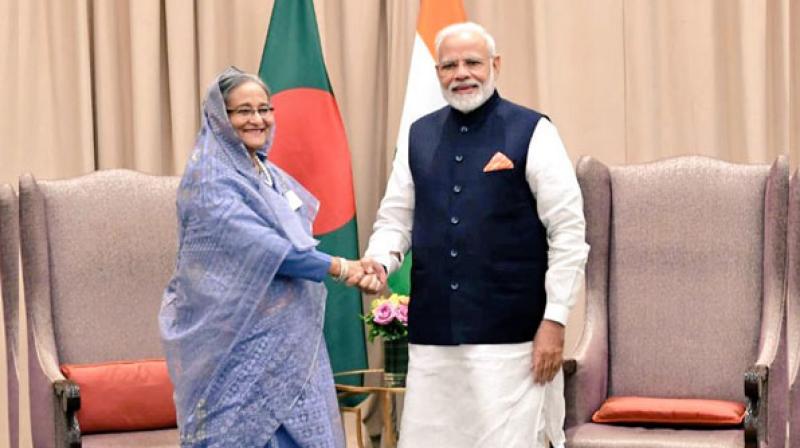 They will inaugrate three projects, including one for the cross-border supply of LPG to the northeast and give a boost to trade and connectivity. (Photo: ANI)

New Delhi: Bangladesh Prime Minister Sheikh Hasina, who is on a four-day visit to India will hold bilateral discussions with her Indian counterpart Narendra Modi on Saturday.

People familiar with the developments have told the Hindustan Times that they will inaugrate three projects, including one for the cross-border supply of LPG to the northeast and give a boost to trade and connectivity.

The issue of the implementation of the National Register of Citizens (NRC) in Assam may surface during the meeting between the two leaders, sources told Hindustan Times.

On Thursday, Hasina said she was satisfied with Prime Minister Narendra Modi’s assurance that her country should not be concerned over the National Register of Citizens (NRC) being implemented in Assam.

According to an Indian Express report, speaking about the NRC at a reception hosted by Bangladesh envoy Syed Muazzem Ali, Hasina said that she doesn’t ‘see a problem’ with the exercise. “I had a talk with PM Modi. Everything is okay,” she was quoted as saying.

Her remarks come a week after she met Modi in New York and said that the NRC has become a matter of ‘great concern’ for Bangladeshis.

As of now, the NRC has included 3.11 crore applicants as citizens, and excluded 19 lakh. The Assam's citizenship exercise of NRC has also raised concern in Bangladesh as many fear that those rendered non-citizens of India may be pushed into Bangladesh.

However, India maintains that it is their internal issue which in no way would affect Bangladesh.

On Friday, Hasina will attend an interactive session with select CEOs of India and the Inauguration of India-Bangladesh Business Forum (IBBF) at ITC Maurya and WEF Closing Plenary at Hotel Taj Palace.