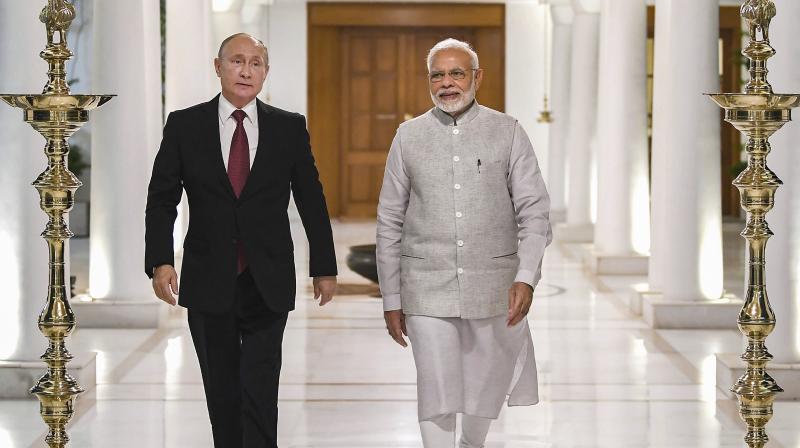 The two leaders will hold comprehensive discussions on wide-ranging bilateral, regional and international issues, including US sanctions against Moscow and counter-terrorism cooperation. (Photo: PTI)

New Delhi: Russian President Vladimir Putin arrived here Thursday evening for the annual summit with Prime Minister Narendra Modi. The two leaders are expected to sign the S-400 air defence system deal and a number of other pacts in key sectors such as space and energy.

Putin, who was received by External Affairs Minister Sushma Swaraj on his arrival, went straight to Modi's official Lok Kalyan Marg residence where the two leaders had a one-on-one meeting.

Later, Modi hosted a private dinner for the visiting dignitary. The dinner meeting comes a day ahead of the 19th India-Russia annual summit during which the two leaders will hold comprehensive discussions on wide-ranging bilateral, regional and international issues, including US sanctions against Moscow and counter-terrorism cooperation.

The Russian President is accompanied by a high-level delegation comprising Deputy Prime Minister Yuri Borisov, Foreign Minister Sergey Lavrov and Trade and Industry Minister Denis Manturov among others during his two-day visit.

Ahead of his meeting, Modi tweeted, "Welcome to India, President Putin. Looking forward to our deliberations, which will further enhance India-Russia friendship." The tweet was also posted in the Russian language.

As Putin landed in New Delhi, the Russian news agency TASS reported that on Friday, a number of bilateral agreements will be signed, including the USD 5 billion contract to deliver the S-400 air defence missile systems to India.

Ahead of the visit, the Russian President's aide Yuri Ushakov was quoted by media as saying that Russia and India are planning to sign more than 20 documents at the end of the Putin-Modi talks and that Putin will oversee the signing of the USD 5 billion deal.

The agreements to be signed are likely to boost cooperation in keys sectors such as defence, space, trade, energy and tourism, among others.

The spotlight will be on the S-400 missile defence system deal as, if signed, it could violate US sanctions under the Countering America's Adversaries Through Sanctions Act (CAATSA) instituted by the US Congress on arms purchases from Russia.

The US has urged its allies to forgo transactions with Russia, warning that the S-400 missile defence system that India intends to buy would be a "focus area" for it to implement punitive sanctions against a nation undertaking "significant" business deals with the Russians.

American lawmakers, however, have allowed the possibility of a presidential waiver. India has already given indications that it will go ahead with the deal notwithstanding the US sanctions.

"India has maintained its sovereignty as regards to its relationship with countries. We shall maintain it in all earnestness," Defence Minister Nirmala Sitharaman told PTI recently when asked whether the US sanctions will hit India's defence ties with Russia, especially after the signing of the S-400 missile deal.

Russia has been one of India's key suppliers of arms and ammunition. Sources had earlier said Modi and Putin would also deliberate on the impact of US sanctions on the import of crude oil from Iran.

Besides holding talks with Modi, the Russian leader will also have a meeting with President Ram Nath Kovind on Friday. He will also interact with a group of talented children and address an India-Russia business meet.

The last annual summit was held on June 1, 2017, during the visit of the prime minister to Russia. In May, Modi had travelled to Russian coastal city of Sochi for an informal summit with Putin during which they discussed a range of crucial issues.