India   All India  05 Oct 2018  Celebrating the ‘surgical strikes’ and taking a look back, a year later
India, All India

Celebrating the ‘surgical strikes’ and taking a look back, a year later

While initially Pak Army was reported to have denied the Indian Army operation altogether, the Inter Services Public Relations 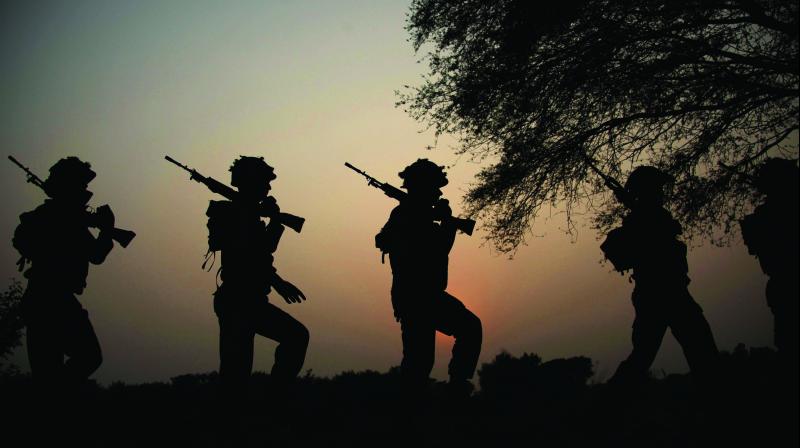 That all this was achieved without suffering casualties was a combination of professionalism and good luck.

To mark the second anniversary of the surgical strikes against terror camps across the Line of Control (LoC) and to showcase the courage, valour and sacrifice of Armed Forces in general and Special Forces in particular , a massive exhibition of Indian Armed Forces weapons and equipment named ‘Parakram Parv’ was held on the lawns of India Gate, New Delhi, from 28 to 30 September 2018. Open to general public, the visitors got the opportunity to see captured weapons used by terrorists, military equipment like artillery guns and small arms, while military bands and noted singers performed at the venue. Versions of this were organized at 53 locations in 51 cities across the country.

The term “surgical” believed to have been coined by someone in the government to make it sound sensational may be misleading to general public. In fact, these strikes were simultaneous surprise raids by night deep into enemy territory on eight/nine Pakistan army posts, spread over a stretch of over 200 kms across the Line of Control, which were launch pads for inducting terrorists into Jammu and Kashmir to attack various targets. Based on very reliable real time information, this operation was launched after meticulous planning, painstaking preparation and close coordination. Executed by Indian Army’s Special Forces troops, with their characteristic guts and calmness, the modus of the attack was a combination of a preponderance of accurate firepower, stealthy advance with ‘boots on the ground’ to the objectives, hit hard and fast and most crucial de-induct. That all this was  achieved without suffering casualties was a combination of professionalism and good luck.

If any comparison is to made, these strikes were like US Special Forces Operation Geronimo/Neptune Spear launched to kill Osama bin Laden, multiplied eight/nine times and without the use of helicopters or artillery.

The Indian Army’s then Director General Military Operations (DGMO), Lt Gen Ranbir Singh, presently GOC-in-C, Northern Coomand, had said, “the motive of this operation was to hit out at the terrorists who were planning to infiltrate into our territory…..Indian armed forces are ready for any contingency. ….I spoke to the Pak DGMO, shared our concerns and told him that we conducted surgical strikes last night….. As of now, we have no plans of further operations.” He had however added that if necessary, more such operations could be undertaken.

While initially Pak Army was reported to have denied the Indian Army operation altogether, the Inter Services Public Relations (ISPR) is later reported to have said that Indian Army troops entered three kilometers and that the exchange of fire began at 2.30 am and continued till 8 am, in which “Pakistani troops befittingly responded to Indian unprovoked firing on the LoC in Bhimber, Hotspring Kel and Lipa sectors.” The ISPR stated that only two Pakistan army soldiers were killed in routine cross border firing and released the photographs of the two dead soldiers.

While 53 terrorists were killed and a lesser number of Pak Army personnel killed and wounded, on 26 September 2016, news reports citing intelligence sources from Pakistan indicated that 16-17 terror training camps of Lashkar-e-Taiyyaba, Jaish-e-Mohammed and the Hizbul Mujahideen were shifted from their current locations after the Uri attack and relocated in Pakistan-occupied Kashmir with the help of the Pakistani army and the Inter-services Intelligence (ISI). Of these, four were terror camps operating from Mansehra and Muzaffarabad. If so, then all the more credit to Northern Command and its units for the results achieved.

In India, the news of these strikes, coming ten days after the dastardly attack on an Indian Army unit in Uri on 19 September 2016, as well as many acts of  war by Pak army supported terrorists, their ‘border action teams’ (of Pak army soldiers and terrorists), barbaric mutilations of Indian soldiers etc., was met with a great sense of long overdue satisfaction and thumping approval by the general public, serving and retired servicemen, political parties and even foreign countries .

However, within just a couple of days, some political parties, particularly the Congress , which, quite obviously driven by a deep sense of jealousy/frustration, drastically changed the narrative.

Beginning from a demand for the government to prove the veracity of the strikes by releasing photographs, the Congress then claimed that there was nothing unprecedented about these strikes, as such actions had often been initiated by its government, which has always been known for reacting with least or nil resistance/retaliation/always not wanting to “raise the level of confrontation”. Soon afterward, the discourse began to degenerate to disgraceful levels and atrocious terminology, like fake encounter, “khoon ki dalaali” (brokerage of blood) by none other than the number two of the Congress, Rahul Gandhi.

Following the Army’s announcement of the successful strikes and having initially praised Prime Minister Narendra Modi ‘s leadership, extending his support and the party’s cooperation, the same Rahul Gandhi freaked out into attacking PM Modi and was reported to have uttered: “Jinhone Hindustan ke liye surgical strike kiye hain, unke khoon ke peeche aap chhupe hain. Unki aap dalali kar rahe ho.” (You are hiding behind the blood of soldiers who carried out the surgical strikes for India. You are exploiting their sacrifices).

During the 2004 - 2014 Congress/UPA tenures, the government’s official responses to attacks by Pak army supported terrorists or border action teams (BAT, a mix of Pak army and terrorists), which infiltrated as far inside Indian territory as Samba military station and attacked Indian Army units, or as horrendous as mutilating and beheading Indian Army soldiers, were usually tepid or lacking in being categorical/precise. If there was any sanction by the government for effective punitive action by the Army, there was never any such indication.

And whatever actions the Army took did not involve crossing the Line of Control or the International Boundary. Following the massacre of  Indian Army personnel and their family members, including children, by Pakistani terrorists on 14 May 2002, the Army did not wait for any sanction/approval or not from the government but responded by pounding some Pak army border  posts. That is when the then US Ambassador  Robert Blackwill raised an alarm of the conflagration between “two nuclear armed nations” and issued an advisory for US tourists planning trips to India. Also, photographs of American diplomats and their families embarking on flights were much publicized. This was a smart ploy because actually these diplomats and families were routinely leaving for trips back home as children’s school vacation began. Whenever borders of friendly countries were crossed in pursuit of terrorists as was done in the North East, it was with much diplomatic tact and wording.

Hence the 28- 29 September 2016 strikes were different as they involved deep ingress into enemy/adversary territory and very obviously with full governmental approval. However, there is also a dichotomy there as not all of the BJP Government’s responses to Pakistani terrorist attacks have been the same or steady. Be that as it may, the fact remains that the advent  of  BJP in 2014 made Pak army quite livid and it upped the ante in Kashmir Valley only to find Indian Army’s and security forces responses more forceful. And with Pakistan’s economic plight being precarious and its global reputation descending , Pak army seems to be feeling the pinch of Indian Army’s offensives. An indication was Pak army chief Qamar Javed Bajwa’s recent reported unprecedented overtures for “peace talks”, but without actually letting up on supporting its terrorists on the ground.

That is because like many of his predecessors, Bajwa too nurses delusions  that its lies/deceit will work. Now, coming to the reactions of  the celebration of the September 2016 strikes. Some Indian Army veterans have expressed  their reservations. Former Army Chief Gen Shankar Roychowdhury clearly stated that when there already is Vijay Divas (victory day) observed every 16 December for valour and sacrifices in all wars/ conflicts/operations, these strikes too are should be included in the same, which is a valid point.

Army Chief General Bipin Rawat, reportedly stated, While he believed there is a need for one more strike, “….it is a weapon of surprise. Let it remain a surprise.”

Interacting with this writer, Lt Gen Vinod Bhatia (Retd), heading the Centre for Joint Warfare Studies, stated,  “…celebrating the surgical strikes akin to a Vijay Diwas is to foreclose the option of carrying out any further surgical strikes.” While the option of repeating such strikes must be kept open and exercised at a time and place of our choosing, it must be remembered any amount of such strikes will only cause some attrition. To hit hard at terrorism in the Kashmir Valley, the separatists must be disabled, not mollycoddled.