Both the accused were arrested after the police came to know about the incident, said officials. 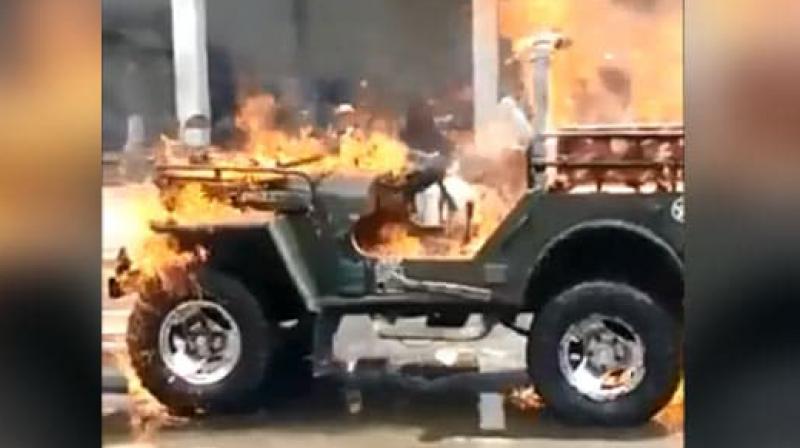 In the video, a man clad in gold jewellery can be seen pouring petrol on his own jeep and then setting it ablaze by throwing a lit matchstick on the vehicle. (Photo: Twitter/ @dineshjoshi70)

Ahmedabad: A jeep owner and his friend were arrested in Rajkot for allegedly setting up their jeep on fire on September 2. The clip showing the vehicle being set afire was circulated on social media, including the video-sharing app TikTok.

In the video, a man clad in gold jewellery can be seen pouring petrol on his own jeep and then setting it ablaze by throwing a lit matchstick on the vehicle.

Check out this person setting his jeep on fire for a tik tok video in Rajkot.. Hope there’s some action. Let’s make him more famous.. @hvgoenka pic.twitter.com/eO5HgfilSq

The police said, "Indrajitsinh Jadeja (33) allegedly set his jeep on fire at Kotharia road in Rajkot on September 2 and his friend Nimesh Gohel (28) was recording the act."

"Both the accused were arrested by the Bhaktinagar Police on September 3," Inspector V K Gadhvi said.

"They were charged for negligent conduct with respect to fire," police inspector Gadhvi said.

Police said, "Jadeja, an auto-parts dealer, set his jeep on fire out of frustration as the engine of the vehicle did not turn on despite several attempts."

"When the jeep did not start despite several attempts, (Indrajitsinh) Jadeja told his friend (Nimesh) Gohel that he will set it on fire. Out of disbelief, Gohel asked Jadeja if he was serious about it," Gadhvi said.

"When Jadeja replied in affirmative, Gohel stood at some distance and recorded the entire incident on his mobile phone," the police inspector said.

"Neither Jadeja nor Gohel had planned to make a TikTok video," the inspector said.

Both the accused were arrested after the police came to know about the incident, he said.

"After shooting the video, Goehl shared it among his friends, who then circulated it on social media. Then someone added a Punjabi song in the background and edited this video using TikTok and made it viral as a TikTok video," Gadhvi said, adding that both the accused were out on bail as local court had refused to grant police remand.