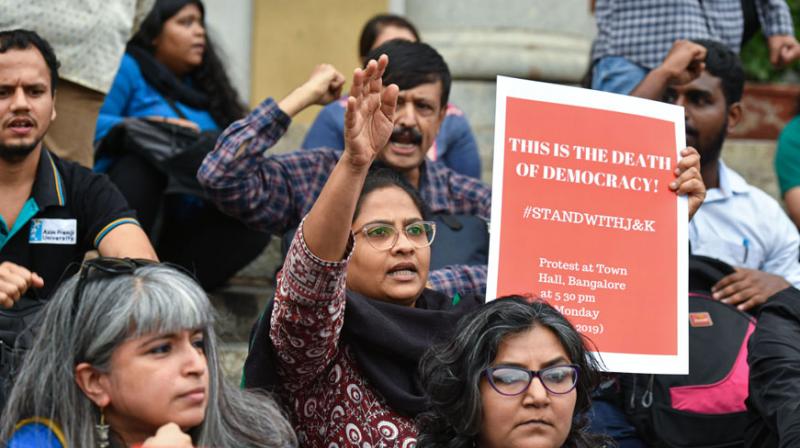 The Madhya Pradesh Police has booked a local Communist Party of India (Marxist) leader for selling a booklet titled 'Dhara 370 - Setu Ya Surang' at a protest here. (Photo: PTI)

Gwalior: The Madhya Pradesh Police has booked a local Communist Party of India (Marxist) leader for selling a booklet titled 'Dhara 370 - Setu Ya Surang' at a protest here.

The booklet on the abrogation of Article 370 was being sold at a protest organised by the Muslim Adhikar Manch to demand the cleaning of a local pond on Tuesday. A case under IPC section 153 (provocation with intent to cause riot) has been registered on Wednesday against CITU leader Sheikh Ghani (64), Padav Police Station in-charge Prashant Yadav said.

The case was registered on the basis of a complaint received by police, Yadav said. The booklet was published by Bhopal-based Lokjatan Prakashan, he said. "We stopped the sell of this booklet after the complaint," Yadav added.

The officer claimed that some parts of the booklet are objectionable. This book is authored by CPI (MP) State Secretary Jaswinder Singh, who held a press conference here on Wednesday. "We will fight against any action in this regard. Nothing is objectionable in this booklet, which I have also gifted to the states CM Kamal Nath ji, Digvijaya Singh ji (senior Congress leader)," he said.

"The book describes that why Article 370 is important for Jammu and Kashmir," Singh said, adding that so far 15,000 copies of the booklet have been sold in the state.

He said Ghani, a senior leader of the CPI (M) and the CITU, was summoned by the police and released after interrogation on Tuesday.
Singh claimed that the police found nothing objectionable in the booklet.

"According to our knowledge, no case was registered," he said.

The CPI(M) leader alleged that police took the action after a tweet by BJP's state media in-charge Lokendra Parashar. "Several objectionable comments were made about Maharaja of Princely State of Jammu and Kashmir Hari Singh and also against the nationalist forces," Parashar told PTI.