Vikram’, the lander, moved to the threshold location from where it descends towards lunar surface between 1 am and 2 am on Sept 7. 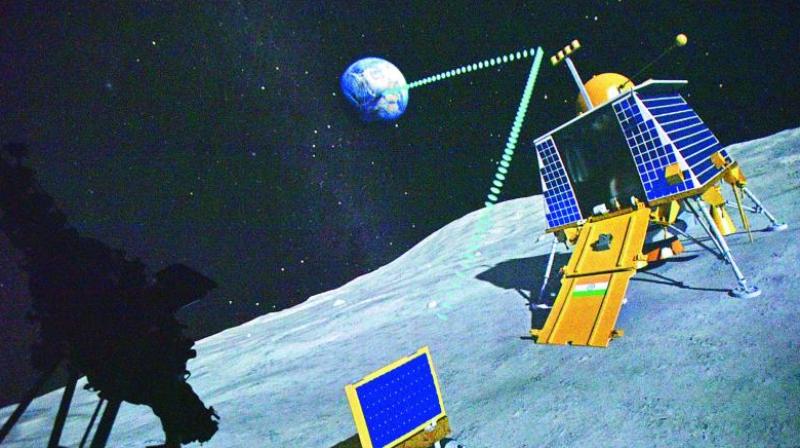 Pictures from the Chandrayaan-2 show a successful landing for the rover. (Photo: S. Surender Reddy)

Bengaluru: With the countdown clock ticking away for the historic moment — landing a probe on the Moon —  Indian space scientists led by Dr K. Sivan, chairman, Isro, are confident of accomplishing the feat though it is the most complicated and nerve-wracking manoeuvre for them.

Early on Wednesday,  “Vikram”, the lander, was moved to the threshold location from where it descends towards the lunar surface between 1 am and 2 am on September 7, and attempt to land close to the Moon’s South Pole between 1: 40 am and 1:55 am. It is now circling the Moon in an orbit 35 km X 101 Km as compared to its previous orbit of 104 km by 128 km on Tuesday. It separated from Chandrayaan-2 orbiter on Monday afternoon with the mothership now in a different orbit at 96 Km X 125 Km. Chandrayaan-2 will be steered to hang about over ‘Vikram’ and continue to receive signals as the lander slowly but surely glides for the momentous landing.

Soon after ‘Vikram’s nudge to the threshold position, Dr Sivan speaking exclusively to this newspaper, said: “We have done all the tests and simulations to achieve a perfect landing on September 7. Of course it is the most complex and terrifying manoeuver which we will attempt for the first time, but we are confident of a soft landing because we have completed a number of rehearsals. It will be a terrifying 15 minutes because the descent will be automatic and autonomous, and not like placing Chandrayaan-2 in the right orbit or shifting it from one orbit to another.”

He said both Chandrayaan-2 and “Vikram” have been beaming data and images from different orbits and responding to signals from ISRO’s ground stations.

Sixty high school students, winners of a national quiz, will join Prime Minister Narendra Modi at the Mission Operations Complex (MOX) at ISTRAC (ISRO Telemetry, Tracking and Command Network) station in Bengaluru, to witness the descent and landing of “Vikram” on the lunar soil on September 7.

A couple of hours after ‘Vikram’s’ touchdown, ‘Pragyan’, the six-wheeled robotic rover, will roll out of the lander and probe the lunar soil for new chemicals, minerals, water, and study the phenomenon of seismic activity for one lunar day (14 days on terra firma).  Chandrayaan-2, however, will continue with its mission for one year.