India   All India  05 Sep 2019  A daring child rescue and an assault on junk food
India, All India

A daring child rescue and an assault on junk food

Living within their own communities gives anganwadi workers a holistic view of the hardships of the people for whose health they are responsible. 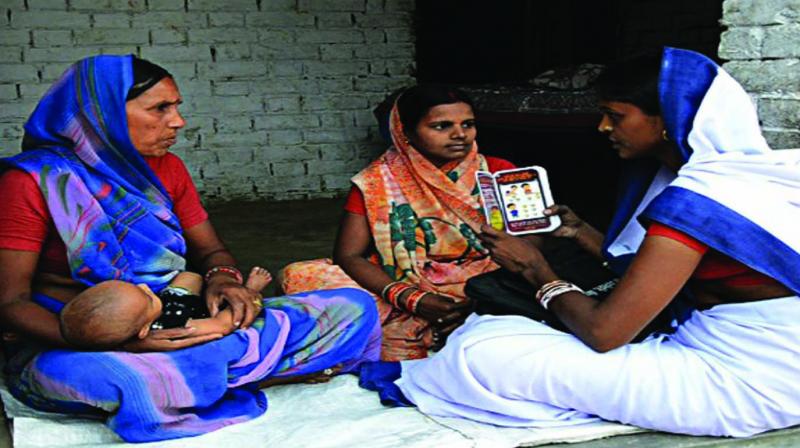 Mumbai, the city that never sleeps, is the financial capital of India — a melting pot of diverse people who migrate from across the country to build a better life for themselves. Yet, the millions of urban poor who inhabit Mumbai’s many slums struggle everyday with regard to their health and welfare, in spite of ready access to information and cutting-edge medical services. Making ends meet in an expensive city is always an uphill task and so naturally, work almost always takes precedence over one’s well-being. This was one of the main reasons why the Poshan Pakhwada, observed between March 8 and 22, 2019, to mark the first anniversary of the government’s Poshan Abhiyan, turned out to be a major eye-opener. As part of the Pakhwada, an awareness and outreach campaign, local Integrated Child Development Services (ICDS) workers planned events in their areas to bring people together to understand the health needs of their family members, especially adolescent girls, women and children.

In the Ghatkopar-Vikhroli areas of eastern Mumbai, anganwadi workers from 24 anganwadis jointly organised a Poshan Mela at Buddha Vihar in Ghatkopar’s Bhim Nagar. The anganwadi workers found an interesting way to show parents how they were inadvertently encouraging their children to have junk food instead of wholesome inexpensive meals. At the Mela, the stalls that caught the undivided attention of the community were the Unhealthy Food Corner and Bal Kopra which represented starkly contrasting pictures of nutrition.

At the Unhealthy Food Corner, packets of wafers, fried namkeen, white bread and chocolates were prominently displayed along with other popular fast foods. According to Vandana Shinde from anganwadi no. 48, Ghatkopar, who was managing the stall, “How easily we hand over money to our children to buy chips and chocolates from the corner store. But these items are addictive. We need to give up the convenience of consuming unhealthy junk food so that our children are on the path to good health.”

On the other side, the Bal Kopra or Child Corner had an array of wholesome, delicious, hassle-free snacks like murmura (puffed rice), chivda, rava suji halwa, Take Home Ration laddoos, and groundnut chikki on offer. Santoshee Sansare, AWW from Ghatkopar, shared, “We need to rustle up such homemade, tasty items for little children to build their strength and immunity. To ensure that mothers know what to do, we periodically hold recipe demonstrations at the anganwadis. These midday snacks may be traditional, but they are packed with vitamins and minerals. Unfortunately, the knowledge about the benefits of these preparations as well as the skill to make these dishes is fading quickly. We are trying to revive our tradition of cooking food with locally available ingredients.”

Living within their own communities gives anganwadi workers a holistic view of the hardships of the people for whose health they are responsible. So they knew that only talking about the ills of fast food would not be enough. Setting up the stalls did the trick because it was eye-catching, and at once presented a clear and complete picture of what was good and what was not. “The bastis are populated with daily wage earners and domestic workers. Young children are fed by their mothers while watching the television. We give nutritious food to children in the anganwadi. But many of them have to be trained to eat with their own hands. Healthy preparations like sprouts and salads don’t find any place in their daily diet. During our home visits, we show them the simple methods of preparing these healthy food items. The well-off Mumbaikars often remark that there is no real need to run anganwadis in our mega-city, but they are completely oblivious of the less fortunate and how they survive,” added Sansare. Sansare is bang on in her observation about the importance of the anganwadi in the lives of the impoverished, uninformed suburban Mumbaikars.

During a session at the Mela where anganwadi workers exchanged stories of success and distress, Reshma Karekar, AWW Vikhroli, narrated an action-packed incident of child rescue. “A north Indian joint family from Bhim Nagar area had brought seven children from their native place. They were always working around the house, washing, cleaning, mopping, and even taking care of the babies. Their salary would be sent to their parents in their village. They were not allowed to step out of the house, and no one in the neighbourhood could speak to them,” Karekar said. Her instincts told her that the children were in trouble, so she decided to pay a visit to the family. “I went inside the house with my AW helper on the pretext of giving them the Take Home Ration packet, and we were shocked to see the state of the children. They were emaciated and exhausted. I had contacted the local police and asked them to come over immediately. We managed to bring them over to the anganwadi where I fed and bathed them. In a few days, they were sent back to their parents. I was able to undertake this rescue operation because we had received para-legal training from the Tata Institute of Social Sciences. I knew what I was supposed to do in such a situation,” she said.

Had there not been an anganwadi in the area and a dedicated and vigilant worker like Karekar, how long would those children have had to live in distress? No one knows.
— Charkha Features