India   All India  05 Sep 2019  23 killed after explosion at firecracker factory in Punjab's Gurdaspur
India, All India

23 killed after explosion at firecracker factory in Punjab's Gurdaspur 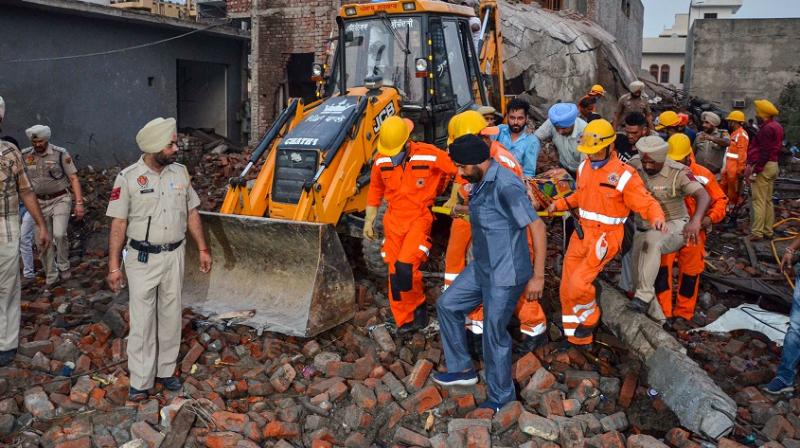 Batala: Sahib Singh of Jangla village who suffered injuries in the Batala firecracker factory blast in Punjab's Gurdaspur district said he was fortunate enough to survive the tragedy, which claimed 23 lives and left 27 injured on Wednesday evening.

"It (blast) was so powerful that I fell unconscious for a long time," said Singh, who had gone to the factory to buy firecrackers for the 532nd marriage anniversary of Guru Nanak Dev, popularly known as "Babe Da Viah" which falls on September 5.

Similarly, Rajpal Khokkar of Batala, was among the few who escaped death. He was returning from nearby Gurdwara Singh Sabha when the incident took place.
"When I heard the loud sound of the blast, I fell down. When I gained consciousness, I found myself in hospital," he said. While Sukhdev Singh survived the tragedy, two others accompanying him died. He said his car was also damaged.

Eyewitness Sukhraj Singh said the impact of the blast was such that a car parked near the factory fell into a drain. Nearby buildings were damaged and their roofs caved in. Locals said the explosion was heard even a few kilometres away.

Adequate arrangements had been made for the treatment of the injured, he said, adding that all doctors and the nursing staff had been called for the emergency situation.

Chief Minister Amarinder Singh said rescue operations were underway with the District Collector and the Senior Superintendent of Police heading the relief efforts.

"Deeply anguished to learn of the loss of lives due to the blast in the firecracker factory in Batala. Rescue operations are underway with the DC & SSP heading the relief efforts," he tweeted.

The chief minister also launched a magisterial inquiry into the explosion.

Gurdaspur MP Sunny Deol too expressed grief over the incident. "Saddened to hear about the news of blast in Batala factory. NDRF teams and local administration have been rushed for rescue operation," Deol said in his tweet.