21 dead in blast at firecracker unit in Punjab

The blast occurred a day ahead of the 532nd birth anniversary celebrations of Guru Nanak Dev. 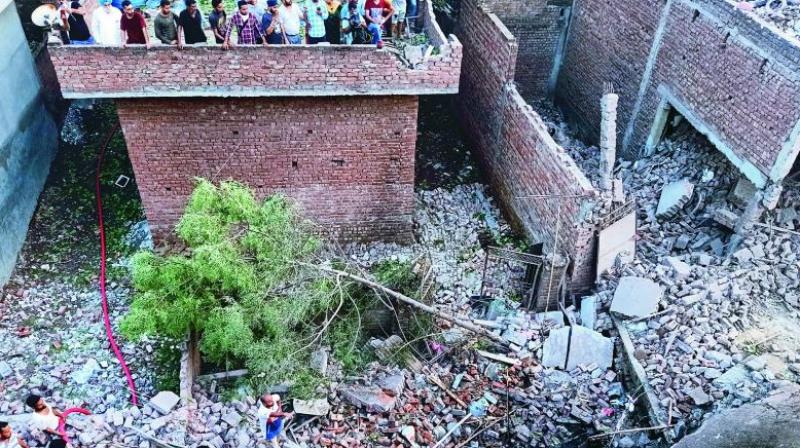 At least 23 people were killed and 27 injured many of them seriously after an explosion at a firecracker factory in Punjab’s Gurdaspur district on Wednesday.

Chandigarh: At least 21 people were killed and thirty injured, many of them seriously, after an explosion at a firecracker factory in Punjab’s Gurdaspur district on Wednesday.

The death toll is expected to rise since many more labourers are buried under the debris of the building located in a residential area called Valmiki Ashram near Hansli naala on Jalandhar road in Batala.

The blasts occurred a day ahead of the 532nd birth anniversary celebrations of Guru Nanak Dev. Festivities are held in the city every year and this time too they were on in full swing when residents heard two loud blasts and a series of low-decibel level ones.

Inspector General (Border Range) S.P.S. Parmar said that the blast occurred around 4 pm at the factory. The massive explosion turned nearby buildings into rubble. Several cars parked nearby were also damaged in the blast.

Residents in the neighbourhood have in the past complained that the factory is illegal, but claim that the bauthorities have failed to take any action. Several demands were also made that the factory should be closed down.

The Chief Minister has announced an ex-gratia grant of Rs. 2 lac for the kin of the deceased and Rs. 50,000 for the seven severely injured, who were referred to Amritsar Medical College. He has announced Rs. 25,000 for those with minor injuries.

Capt Amarinder also directed both the Civil and Police administration of district Gurdaspur to extend all possible help to the victims’ families in this hour of grief. He also directed the Deputy Commissioner, Gurdaspur, to provide the best possible treatment to the injured free of cost, besides asking SSP Batala to supervise the evacuation operations being carried out by the NDRF teams.

Shiromani Akali Dal (SAD) president Sukhbir Singh Badal also expressed deep anguish at the demise of 20 persons. He demanded immediate enforcement of the directions of the Supreme Court on all firecracker factories in the State.