Mr Chouhan had earlier called him anti-national for making statements detrimental to the interest of the country. 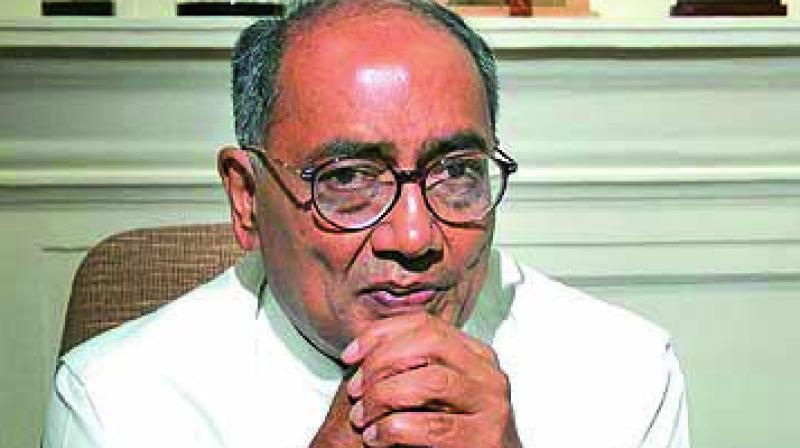 Bhopal: Senior Congress leader and former chief minister Digvijay Singh on Tuesday reacted sharply to charges made by Bharatiya Janata Party (BJP) that he had links with Naxals, daring Madhya Pradesh (MP) government as well as the Centre to establish the allegation and arrest him.

In a related development, MP chief minister Shivraj Singh Chouhan expressed serious concern over the “exposure” of the Congress leader’s alleged nexus with Mao-ists, as revealed in a purported communiqué  between two Maoist leaders, describing it, “worrisome”.

Reacting to charges by BJP national spokesman Sambit Patra made against him, the Congress veteran explained that the telephone number said to have been mentioned in the purported Maoist letter had been shared with many people.

“The particular telephone number had been mentioned in my visiting card and thus shared with many people. If anyone has used the number (in a letter), I am not accountable for it. Besides, I have stopped using the number since last four years. I do not know any Maoist leader,” Mr Singh told reporters at Satna in Madhya Pradesh.

“First sedition charges were leveled against me and now I have been accused of having link with Naxals. I challenge the state government as well as the Centre to arrest me if they have evidence against me,” Mr Singh added.

Mr Chouhan had earlier called him anti-national for making statements detrimental to the interest of the country .

Mr Singh said the Bhima-Koregaon was not a lefr-wing extremist movement and the individuals arrested by Maharashtra police on charges of being Maoist aides, were social activists.

Mr Chouhan, while taking to twitter, sought action against Mr Singh in the wake of the exposure of the latter’s alleged link with Naxals. “Congress should conduct a probe into it and sack him from the party,” he tweeted.

The letter, dated September 25, 2017, purportedly written by Naxal leader Prakash to his colleague Surendra mentioned the telephone number saying the latter could contact “our frie-nd,” if needed for funds.