India   All India  05 Sep 2018  Kolkata bridge collapse: 2 yet to be traced as search ops continue
India, All India

Kolkata bridge collapse: 2 yet to be traced as search ops continue

A part of the 50-year-old Majerhat bridge caved in Tuesday, killing one person, trapping several people and crushing many vehicles. 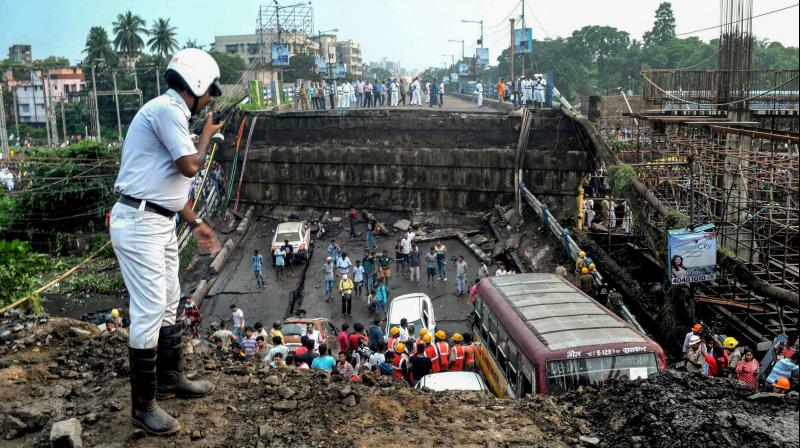 Labourers working on the metro project claimed two of their co-workers, who were probably inside a temporary shelter underneath the bridge, are still missing. (Photo: PTI)

Kolkata: Two persons were missing after a portion of the Majerhat bridge in south Kolkata collapsed, West Bengal Chief Minister Mamata Banerjee said Wednesday as operations to locate those who might still be trapped in the debris were stepped up.

A part of the 50-year-old bridge on the arterial Diamond Harbour Road caved in Tuesday evening, killing one person, trapping several people and crushing many vehicles.

Banerjee, who is in Darjeeling, said two persons are still missing and search operations are on to trace them. Banerjee said she has been monitoring the rescue operations from the hills.

Banerjee, who is cutting short her Darjeeling visit and is scheduled to reach Kolkata and visit the site in the afternoon, said the police and administration have done well in carrying out the rescue work.

"There could be a few trapped underneath the collapsed bridge. We are trying to find them. We are using cutters and drill machines to cut through the concrete slabs of the bridge. Till now, we are unable to locate anybody. We are trying our best," an official of the rescue team added.

The area near the site has been dug up for a metro railway project and construction material is strewn all over the place.

Labourers working on the metro project claimed two of their co-workers, who were probably inside a temporary shelter underneath the bridge, are still missing.

The bridge in crowded Alipore area runs over the Majerhat Railway Station and connects the city centre with the heavily populated Behala, vast areas of the southwest suburbs and neighbouring South 24 Parganas district.

As rescuers escalated their efforts, thousands of people were stuck in jams with the arterial Diamond Harbour Road being closed. A traffic police officer said vehicles that usually move to and from the city through Majerhat bridge have been diverted through various other roads.

"Train services of Circular Railway from Dum Dum to Majerhat has also resumed this morning," he said. However, services in the Circular Railway portion of railway track between New Alipore and Majerhat stations that passes under the bridge are temporarily suspended, he said Eastern Railway had stopped the movement of trains on the lines on Tuesday as a precautionary measure.

The rescuers tried drilling the concrete slabs, used sophisticated cameras and engaged sniffer dogs to ensure anybody trapped under the rubble could be reached and rescued. The rain complicated the operation.

Additional lighting arrangements were made to aid rescue work at night, the officials said. Police said Tuesday evening that 27-year-old Soumendu Bag had died in the collapse while 21 people, including three women, were injured.

A minibus, four cars and a few motorcycles that were damaged in the bridge collapse were removed using cranes, the official said.

BJP MP Roopa Ganguly, who visited the site Wednesday morning, held the Trinamool Congress-led state government responsible for the collapse and alleged that the bridge was not maintained properly.

The chief minister has said a committee headed by Chief Secretary Malay De will investigate the cause of the collapse. This is a third bridge collapse in the city since 2013.

A flyover under construction collapsed in crowded Burrabazar area, the wholesale business hub of the city, on March 31, 2016, claiming 26 lives. On March 4, 2013, a road bridge had collapsed in Ultadanga area in the northern part of the city. There were no casualties.