Protestors warned ruling BJP that it will have to pay a heavy price in upcoming LS polls for ignoring their demands. 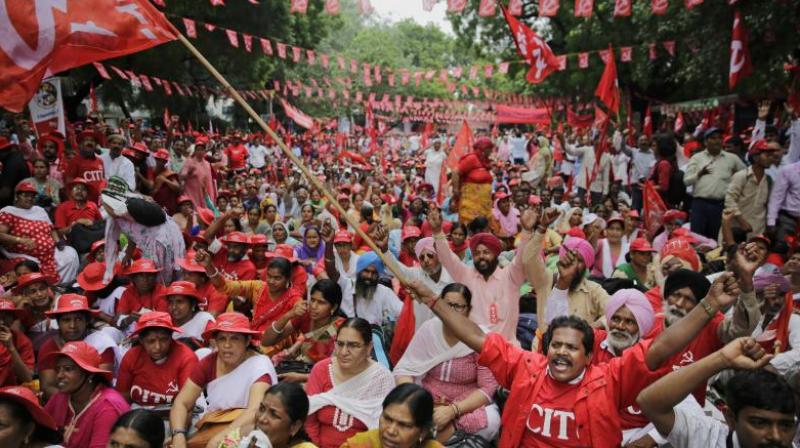 New Delhi: Thousands of farmers and labourers from across the country held a massive protest in the national capital on Wednesday against what they called "anti-people" policies of the Modi government, and demanded higher prices for farm produce, waiver of loans and better wages.

The protesters, holding placards and shouting anti-government slogans, marched from Ramlila Maidan to Parliament in Central Delhi, and warned the ruling BJP that it will have to pay a heavy price in the upcoming Lok Sabha polls for ignoring the demands of the disadvantaged people.

The organisers claimed nearly 1.5 lakh farmers and labourers from at least 23 states have participated in the protests, preparation for which had started several months back.

The protest has thrown the traffic out of gear in several parts of Delhi.

"The massive protest is a warning to the BJP government ahead of the Lok Sabha elections as for the last four years it has ignored the demands of the farmers and the workers," said Tapan Sen, general secretary of CITU, a leading trade union.

Carrying red flags and wearing red caps, the marchers raised slogans against the policies of the BJP government and assailed the ruling party's "communal and divisive" agenda.

The organisers said this was the first time after Independence that farmers and workers jointly participated in a rally against the government.

The farmers in various parts of the country have been holding protests demanding loan waiver and better prices for farm produce.

Addressing the rally, AIKS leader Vijoo Krishnan claimed 36,000 farmers have committed suicide over the last few years and said the BJP government is piling up miseries on the marginalised section.

"For the last four years, this BJP government has fooled us. It has never done anything for the farmers. The government should give farmers remunerative price as per the recommendations of the Swaminathan Committee," AIKS general secretary Hannan Mollah said.

"We will continue our struggle till our demands are met," he said, adding the struggle will continue till "we change the central government". He said all other farmers' organisations will hold a long march and come to Delhi on November 30. "Trade unions will also hold a two-day strike by the end of the year," he said.

The rally was also supported by a large number of artists, academicians and left-wing intellectuals. A large number of protesters arrived in Delhi around three-four days ago.

"Workers and farmers coming together has enthused the other sections of the society. Now the Youth Federation has decided to organise a rally on November 3 protesting against unemployment in the country. Before that, they will hold a 24-hour dharna in front of all central government offices in all districts," said Sen.