BJP-led state govt held meeting with leaders of Patidar community on Tuesday, hrs after doctors expressed concern over the health of Patel. 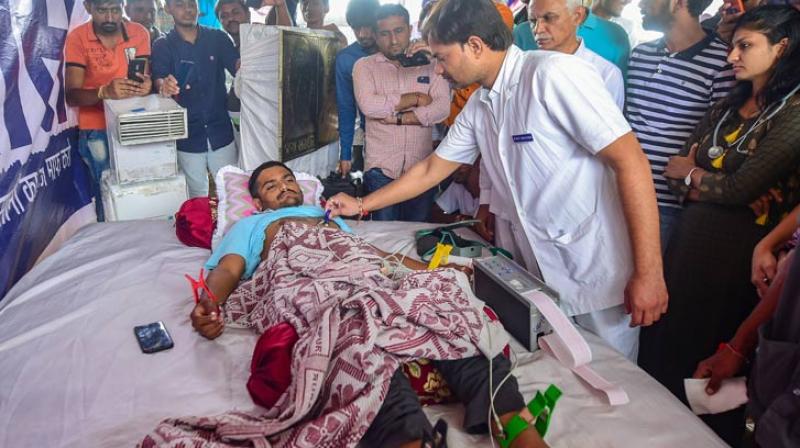 Hardik Patel had launched his fast on August 25 for demands, including farm loan waiver and reservation for the Patidar community under OBC category in government jobs and education sector. (Photo: PTI)

Ahmedabad: As doctors expressed concern over the health of Hardik Patel, the Gujarat government, on Tuesday, stepped up its efforts to persuade the Patidar leader to end his indefinite hunger strike which entered eleventh day.

Hardik Patel had launched his fast on August 25 for demands, including farm loan waiver and reservation for the Patidar community under OBC category in government jobs and education sector.

The BJP-led state government held a meeting with several key leaders of the Patidar community at Gandhinagar on Tuesday night, hours after doctors expressed concern over the health of Hardik Patel, who has lost almost 20 kgs weight in the last eleven days.

The doctors attached to the Sola civil hospital said Hardik Patel had lost weight and should get admitted to the hospital.

After meeting Patidar leaders associated with six different bodies of the community, Energy Minister Saurabh Patel said the government's priority is to ensure that the Patidar leader calls off his hunger strike.

"During the meeting, we conveyed that the government is worried about Hardik Patel. We appealed to the leaders to persuade Hardik Patel to end his fast. The leaders have promised us that they would meet Hardik Patel in this regard," the energy minister said after the meeting.

CK Patel, who led the delegation of Patidar leaders, told reporters that they would convey the feelings of the government to the 25-year-old quota spearhead.

"This is just a first meeting over many issues of Patidars. Such meetings will take place in the future too. The government showed a positive approach to many of our demands. We will meet Hardik Patel to convince him to end his fast," he told reporters.

Earlier in the day, Saurabh Patel had claimed that Hardik Patel's quota movement was a politically-motivated agitation with the backing of the Congress.

Meanwhile, more support poured in for Hardik Patel Tuesday, as former Union minister Yashwant Sinha along with Bhartiya Janata Party (BJP) MP Shatrughan Sinha met him at his residence near here and extended their support.

After the meeting, Yashwant Sinha announced that he would take Hardik Patel's agitation, particularly with regard to farmers, to the national level.

"During my short meeting with Hardik, it has been decided that we will take this agitation to the national level and fight strongly. Not just Gujarat, we will take this movement to every corner of the country," Sinha told reporters.

"The issues on which Hardik Patel is holding fast have created an impact across the country. The issues are being discussed everywhere," he added.

While the former Union finance minister maintained that he and others were with Hardik Patel in his "fight for farmers", he also opined that the government should pay attention to the demand of reservation.

Responding to a query on caste quota, Sinha said the Union government should chart out a way forward as people from various communities who were outside the scope of reservation have demanded it.

"The Central government should think about this. It has formed a backward class commission. It should think on how to take this matter forward. As far as possible, we should try to work to improve (lives) of many communities who have lagged behind, as per Constitution," he said.

Shatrughan Sinha said their meeting with Hardik Patel was not politically motivated.

"We gathered here in a non-political capacity on the basis of humanity. We are here because our aim is to construct the temple of humanity. We have no objection on mandir-masjid (sic)," he said.

He alleged that the BJP governments in Centre and Gujarat were not bothered even as the entire Patidar community was worried about Hardik.

"When farmers' loans can be waived in other BJP-ruled states, why it cannot happen in Gujarat? Farmers must get justice. I appeal to the government to waive farm loans," Shatrughan Sinha said, adding democracy needs to be strengthened to fight autocracy.

Meanwhile, the state government Tuesday told the Gujarat High Court that it was not trying to suppress or "demoralise" the agitation of Hardik Patel.

The government, in a written reply, said it was only trying to ensure that there was no violence such as witnessed during the Patidar quota agitation three years ago.

The Patidar Anamat Andolan Samiti (PAAS) led by Hardik Patel has moved the high court, alleging that police were not letting people enter the bungalow on the outskirts of Ahmedabad where the quota leader is on hunger strike since August 25.

Hardik Patel had launched his hunger strike on the third anniversary of his mega pro-quota rally in Ahmedabad.

He had on Sunday released his "will" in which he divided his property among his parents, sister, 14 youths killed during the quota agitation in 2015 and a 'panjrapole' (shelter for ill and old cows) near his village.

Apart from the Congress, leaders and representatives of the Aam Aadmi Party, Trinamool Congress, Nationalist Congress Party, Rashtriya Janata Dal and Hindustani Awami Morcha (HAM) have visited Hardik Patel at his residence and extended their support.