India   All India  05 Sep 2017  ‘End to Doklam standoff a victory for quiet diplomacy favoured by India’
India, All India

The Chinese handling of the Doklam stand-off was extraordinarily shrill and offensive. The Indian response was mature, restrained and sensible. 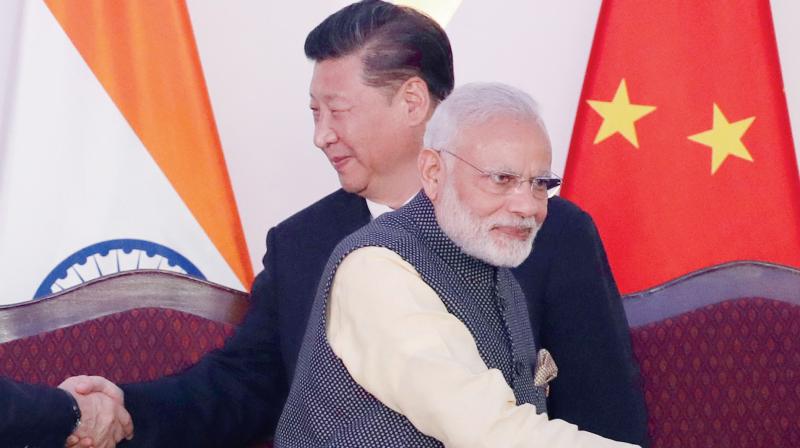 In this file photo, Prime Minister Narendra Modi and Chinese President Xi Jinping at the Brics summit in Goa in 2016. (Photo: AP )

As the world watched with bated breath, Asia’s two most populous countries — India and China — resolved a potentially dangerous military standoff at Doklam. In a candid interview with Sridhar Kumaraswami, Ashok Kantha, a former Indian ambassador to China and currently director of the Institute of Chinese Studies, New Delhi, talks about the implications on ties between the two nuclear-armed neighbours. Excerpts from the interview:

Do you see the Doklam faceoff resolution as a victory for India? Was China under pressure to resolve the issue before the Brics Summit to ensure PM Modi’s participation?
I would refrain from looking at the Doklam disengagement as win or lose outcome for either side. It is a victory for quiet diplomacy favoured by India. It helps both sides that a tricky and potentially dangerous stand-off has been resolved. China did not want the Brics Summit hosted by its “core leader” Xi Jinping to be overshadowed by Doklam. In any case, China had little to gain by a protracted military face-off and it needed an exit ramp which diplomacy provided.

China badgered India with its bluster for more than two months. How do you see the Indian response of restraint?
The Chinese handling of the Doklam stand-off was extraordinarily shrill and offensive. The official media engaged in pugnacious rhetoric and repeated pronouncements by official spokespersons were also in a similar tone. The Indian response was mature, restrained and sensible: It combined firmness on the ground with a studied refusal to indulge in tit-for-tat polemics, which would have complicated the search for a solution. Bhutan also maintained its clear position opposing construction of road by China on its territory and counselling the latter to restore the status quo ante as of 16 June.

As a result, instead of being able to brow-beat Bhutan and India, China had to shift its position, quietly dropping the precondition of unilateral withdrawal by the Indian personnel before commencement of meaningful talks and come to an understanding on mutual disengagement which essentially restores the status quo.

India and China are deliberately not challenging each other’s statements despite some variance. I would say that deft diplomacy by both sides has given space to China to extricate itself from the corner it had painted itself in.

China claimed that it had intimated India twice in advance about its plans to build a road in Doklam. Do you think the faceoff could have been avoided in the first place had the issue been diplomatically tackled then?
I am not privy to diplomatic exchanges or what has transpired in meetings between the border commanders of the two countries. However, it has been my assessment that the Chinese action in Doklam is part of a larger pattern of behaviour in South China Sea and elsewhere. It involves a muscular China asserting its contested territorial claims and unilaterally changing facts on the ground. It expects other concerned parties to accommodate the altered ground realities, as has happened in South China Sea. Bhutan and India did not follow this script and refused to accept the ‘new normal’, which partly explains the furious Chinese reaction. Perhaps, China did not expect Bhutan to resist its giant northern neighbour, but it firmly stated its position. China probably did not expect India to step in as it did. That Bhutan and India could defy China’s coercive diplomacy and persuade it to pull back has wider resonance and might encourage others to push back against Chinese unilateralism.

Do you feel there was any real threat of war breaking out during the standoff?
India and China have managed to maintain peace and tranquillity despite major differences on the boundary and the line of actual control. This is a shared achievement. I believe that China too would be reluctant to change the present situation of no loss of life due to clashes between the border personnel since 1975. Indeed, peaceful borders are an essential prerequisite for the continued development of bilateral relations.

I was confident that there was no real risk of war breaking out during the Doklam episode, though one could not rule out some probing action by China if the face-off had got protracted. Despite the asymmetry in GDP and military budgets of the two countries, we have a robust deterrence in place vis-à-vis China. This deterrence must be continuously upgraded to discourage any reckless behaviour by China.

Will the terms of the agreement mean a loss of face for Chinese President Xi Jinping? Does he stand weakened now?
It is difficult for us to fully assess as to how the Doklam dénouement is being received within the Chinese political establishment, though I doubt that it has weakened President Xi. Doklam was not allowed to become a big issue within China, though there was much sound and fury directed outwards. In fact, it was not trending in the Chinese social media until its resolution, which has been largely welcomed.

However, China should introspect as to why its rise and more specifically its assertive behaviour is causing anxieties among its neighbours. China should shed the habit of treating its contested territorial claims as its “indisputable” territories; otherwise, there will be growing pushback by the affected parties.

Ties between President Xi and PM Modi began on a high note in September 2014 when he visited India. But after that China began blocking India’s entry into the NSG and UN sanctions on terrorist Masood Azhar. What went wrong?
We witnessed marked progress in India-China relations, particularly as a result of President Xi’s visit to India in September 2014 and Prime Minister Modi’s visit to China in May 2015. However, we have also seen a pronounced trend of China becoming more assertive and less sensitive to India’s interests, concerns and aspirations on a range of issue, including CPEC, NSG and Masood Azhar. Differences have been articulated by both sides in the public domain which has made the task of managing this sensitive relationship even more challenging. The way China handled Doklam has left a bitter aftertaste which is bound to affect perceptions in India.

Yet, the resolution of the Doklam stand-off and the upcoming meeting between Prime Minister Modi and President Xi in Xiamen can mark a new beginning. We need sustained strategic consultations to bring the relationship back on a pragmatic footing.

What does the Doklam episode and its aftermath mean for relations between Bhutan and China? Are chances of any boundary resolution between them as good as gone?
I do not wish to comment on the prospects of a boundary settlement between Bhutan and China. Despite the huge gap in the size, strength and resources of the two countries, Bhutan has held its ground in 24 rounds of boundary negotiations with China.

Unfortunately, China has indulged in a pattern of creeping encroachments in Bhutanese territory, first through activities of Chinese graziers, then patrolling by the PLA and construction of roads and temporary dwellings. It has laid claim to areas which are regarded by Bhutan as undeniably its territory. If you look at Bhutan’s National Assembly resolutions, there is considerable unhappiness there about the Chinese habit of creating new facts on the ground to back up its exaggerated claims.

How can China and India put in place mechanisms in the future to avoid such face-offs? Or do you now see them as inevitable in other sectors as well?
We have six bilateral agreements which provide the framework and mechanisms for the maintenance of peace and tranquillity in the border areas. What is needed is adherence to the agreements and understandings reached in the past, including on respecting and clarifying the LAC.  It is not desirable to put the boundary question on the back-burner as the differences on this issue and frequent stand-off situations are contributing to an atmosphere of mistrust in India-China relations. While the two sides have achieved mutual disengagement in Doklam, the underlying differences, including on the trijunction point, remain unaddressed.

An effective way of discouraging recurrence of Doklam-like situations is to reinforce our deterrence and improve infrastructure in the border areas, while we pursue a boundary settlement and optimally utilise the existing mechanisms for border management.