The declaration referred to terrorism at least 17 times, apart from mentioning other forms of extremism and radicalisation. 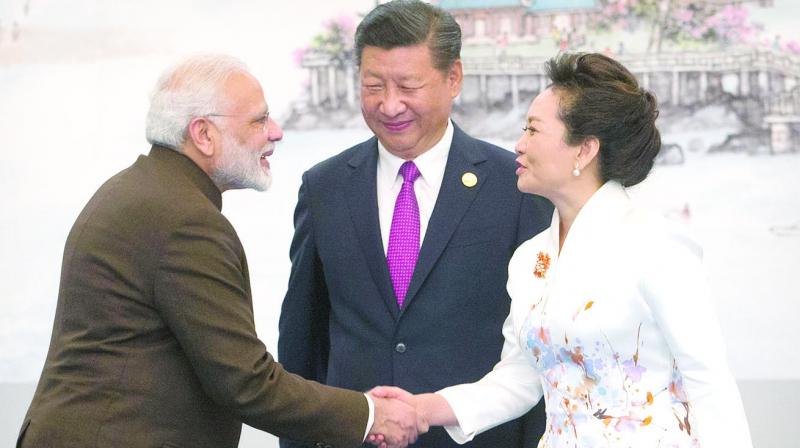 New Delhi/Xiamen/ Beijing: In a major diplomatic victory for India, the Brics Summit joint declaration for the first time named Pakistan-based terrorist groups Lashkar-e-Tayyaba (LeT) and Jaish-e-Mohammad (JeM) along with ISIS, Taliban and others groups indulging in violence, while adding that “those responsible for committing, organising or supporting terrorist acts must be held accountable”.

“We express concern on the security situation in the region and violence caused by the Taliban, ISIL/DAISH, Al-Qaeda and its affiliates including Eastern Turkistan Islamic Movement, Islamic Movement of Uzbekistan, the Haqqani network, Lashkar-e-Tayyaba, Jaish-e-Mohammad, TTP (Tehreek-i-Taliban Pakistan) and Hizb ut-Tahrir… We deplore all terrorist attacks worldwide… and condemn terrorism in all its forms and manifestations wherever committed and by whomsoever and stress that there can be no justification whatsoever for any act of terrorism,” said the declaration on Monday, adopted at the 9th Brics Summit in Chinese city of Xiamen.

The statement — issued with the endorsement of the five Brics nations — comes a day ahead of Prime Minister Narendra Modi’s bilateral meeting with Chinese President Xi Jinping on Tuesday.

In Xiamen, MEA’s secretary (East) Preeti Saran was quoted as telling reporters, “For the first time specific listing of terror organisations has been made (in the Brics declaration)... Terrorism is a scourge that has to be addressed collectively by the entire international community. And, I think, increasingly there is a realisation that you cannot have double standards in tackling this scourge.”

The declaration referred to terrorism at least 17 times, apart from mentioning other forms of extremism and radicalisation.

At the Brics Goa Summit last year, China had stalled India’s efforts to include Pakistan-based terror groups in the declaration. But New Delhi seems to have persuaded Beijing this time to come on board.

China said that Pakistan-based terrorist outfits like JeM, LeT and the Haqqani network have been included in the Brics joint declaration due to concerns about their violent activities in the region.

“These organisations are all sanctioned by the UN Security Council and have a significant impact for Afghanistan issue,” Chinese foreign ministry spokesman Geng Shuang told news agency PTI in a written response.

He, however, skirted a question on whether the naming of JeM by Brics nations marks a change in Beijing’s stand of opposing the UN ban against the group’s chief Masood Azhar.

China has been blocking efforts by India to get UN sanctions imposed on JeM chief and Pakistan-based terrorist Masood Azhar. While India hopes that China, having put its signature on the statement, will follow it up with action, Beijing is most likely to back its all-weather ally and “iron brother” Islamabad at all global fora.

“We reaffirm that those responsible for committing, organising, or supporting terrorist acts must be held accountable… we stress the necessity to develop international cooperation, in accordance with the principles of international law, including that of sovereign equality of states and non-interference in their internal affairs. We reaffirm solidarity and resolve in the fight against terrorism… and agree to strengthen our cooperation,” the Brics declaration said.

Ahead of the Brics Summit, the Chinese foreign ministry spokesperson had said, “We noticed that India, when it comes to Pakistan’s counter-terrorism, has some concerns. I don’t think this is an appropriate topic to be discussed at the BRICS Summit.”