The Trinamul Congress supremo, however, complained to Mr Modi that the Damodar Valley Corporation (DVC) was to blame for causing the flood 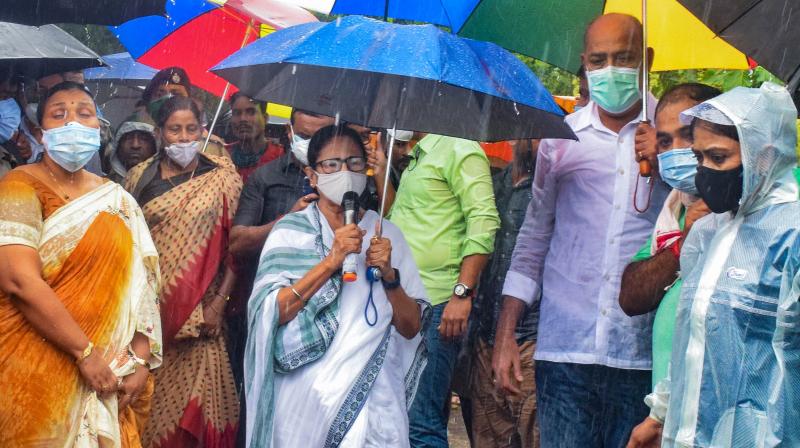 Kolkata: Prime Minister Narendra Modi, worried over the flood situation in some districts of West Bengal following the discharge of water from barrages, called up chief minister Mamata Banerjee on Wednesday and assured her of Central help to tackle the situation.

The Trinamul Congress supremo, however, complained to Mr Modi that the Damodar Valley Corporation (DVC) was to blame for causing the “man-made” flood, and also informed him in a letter that she would send a report on the extent of damage and seek Central funds.

Ms Banerjee got a call from Mr Modi in the afternoon as she was going to visit Amta in Howrah, one of the worst-affected districts, travelling by road after cancelling her aerial survey by helicopter due to a fresh round of heavy rains.

The PMO tweeted: “PM @narendramodi spoke to WB CM @MamataOfficial on the flood situation caused by water discharge from dams in parts of the state. PM assured all possible support from the Centre to help mitigate the situation. PM Modi prays for the safety and well-being of those in affected areas.”

The CM was also scheduled to visit Udaynarayanpur in Howrah and Khanakul in Hooghly by road, but the rising water level foiled her plans.

Ms Banerjee later wrote to Mr Modi: “Kindly refer to our telephonic conversation today on the grave man-made flood situation in some districts of West Bengal due to the unprecedented release of water from the DVC dams at Panchet, Maithon and Tenughat. Recently, there has been a low-pressure formation resulting in high rainfall in West Bengal and Jharkhand. Nearly, two lakh cusecs of water were discharged from Panchet, Maithon and Tenughat dams of the DVC, leading to the severe flooding of huge areas in Hooghly, Howrah Purba, Bardhaman, Paschim Bardhaman, Birbhum and Paschim Medinipur districts.”

She went on: “Apart from the loss of 16 precious lives, there has been unprecedented displacement, suffering and loss of livelihood of lakhs and lakhs of farmers and people at large causing extensive damage to agricultural crops, fisheries, houses, roads, bridges, power lines and other infrastructure.”

Ms Banerjee then pointed out her previous reminders to him about “the urgent need for renovation, upgradation and modernisation of assets of the DVC and other allied systems, inter alia, essential de-situation and dredging” and “most important, increasing the water-holding capacity of the DVC dam by around 1.2 lakh acre feet”.

She added: “Moreover, despite the state being regularly ravaged by natural disasters in the form of cyclones and man-made floods which we are presently witnessing, no financial help has been forthcoming from the Centre. The state has to cope with compensating the loss of lives and property from our meagre resources. In respect of the current floods, we will shortly be sending our damage assessment for your kind intervention.”

DVC executive director (civil) Satyabrata Banerjee said, however, that the water was released only after getting written permission from the state government.