People are instructed not to post objectionable content on social media platforms, which may create rift between communities, the order said 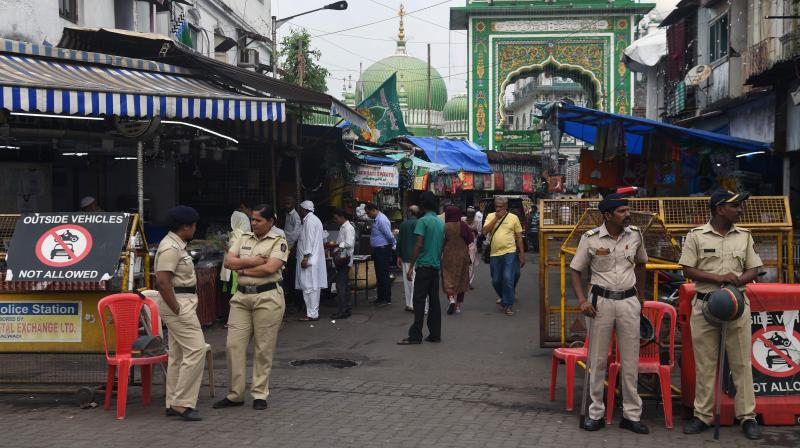 Police stand next to roadblock on the street leading to a mosque in a Muslim majority neighbourhood in Mumbai. Maharashtra government has issued preventive orders in some parts of the state warning action against holding victory rallies and celebrations. (PTI Photo)

Mumbai: As the Bharatiya Janata Party (BJP) cadre gets ready to celebrate the occasion of bhoomi pujan of Ram Mandir, the Maharashtra government has issued preventive orders in some parts of the state warning action against holding victory rallies and celebrations.

At Vita in Sangli district, the police have issued a notice to the BJP leader Anil Babar asking him not to hold any celebrations at public places in the city on account of bhoomi pujan ceremony.

“No victory rallies and distribution of sweets will be carried out and no public events will be held at religious places. In addition, no objectionable slogans, flags, posters, which will hurt the public sentiments, will be allowed,” said the police notice.

The Pune rural police have also issued an order stating that citizens should refrain from circulating messages that could create confusion among people and cause a law and order situation. People are instructed not to post inflammatory, objectionable and false content on social media platforms and messaging applications, which could create a social and religious rift between communities, the order said.

Commenting on this, BJP leader Devang Dave slammed the state government saying Shiv Sena chief late Balasaheb Thackeray would not have tolerated this.