The development had even brought to fore factionalism in BJP, much to the glee of Congress. 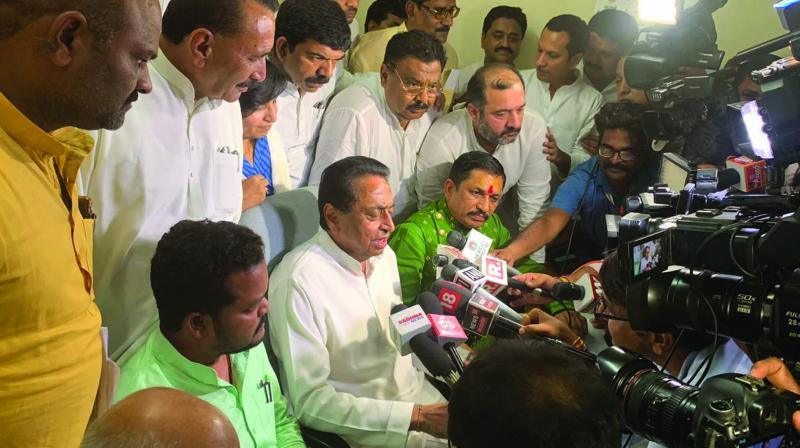 Kamal Nath being flanked by two rebel BJP MLAs in a press conference.

Bhopal: The euphoria that prevailed in the Congress in Madhya Pradesh after two BJP MLAs declared their support to the Kamal Nath government last week has seemed to be giving way to uneasiness in the ruling party with the development unnerving a powerful section in it.

MP chief minister Kamal Nath had dealt a stunning blow to the Opposition when he split the BJP legislature party by getting a couple of its MLAs, Narayan Tripathy and Sharad Kol, to vote for a treasury bench sponsored Bill in the just-concluded Budget session of the Assembly here, barely hours after BJP heavyweight Gopal Bhargav boasted that he would pull down his government “within 24 hours” after receiving a signal from the Central leadership of his party.

Mr Nath, flanked by two BJP leaders, had later showcased the development as victory of trust vote by the Congress in the House which has “established that my government is no longer a minority one”, leading Congress workers to set off crackers and share sweets in celebration of the occasion.

The “unexpected” turn of the event has clearly put BJP on the defensive.

The BJP leadership here had later convened a meeting of its leaders, including MLAs, under the pretext of giving a boost to its ongoing membership drive, to take stock of the situation and keep its flock together.

The development had even brought to fore factionalism in BJP, much to the glee of Congress.

The upbeat mood in the Congress had however lasted barely a week with a powerful section in the party openly voicing their displeasure over the reported move to induct the two rebel BJP lawmakers in the party, thus indicating a brewing revolt in the party over the development.

Veteran Congress leader Ajey Singh, son of former chief minister late Arjun Singh, apparently felt that such a move would prove detrimental to the interest of the party.

Sources close to him said there was an attempt to clip his wings in the party and the move to induct two rebel BJP lawmakers particularly Mr Tripathy, was allegedly part of the design.

Mr Tripathy, a former Congress leader, hailed from the Vindhya region, considered the area of influence of Mr Singh, who lost the 2018 Assembly elections from Sidhi in MP.

Even an influential Congress leader had expressed doubt if the decision to rope in two BJP MLAs to vote for the government-sponsored Bill would serve any purpose.

“The government has frittered away an opportunity to complete its full term by taking recourse to such an unnecessary and Quixotic step without realising its consequences,” the Congress leader was heard telling his close confidants in the party.

“A section of Congress leaders is under the impression that the move was undertaken to contain dissidence in the party, rather than ensure stability to the Kamal Nath government,” a senior Congress leader confided before this newspaper requesting anonymity.

Incidentally, the delay in expansion of the state ministry as well as appointment of new Pradesh Congress Committee (PCC) president of MP has triggered restlessness among some senior party MLAs as well as a section of factional leaders who were desperate to induct their followers in the Kamal Nath Cabinet to keep their flocks together.

Mr Nath who is also the PCC chief has announced to step down from party post after he became chief minister.

The division called for the passage of Criminal Law (Madhya Pradesh Amendment) Bill, 2019 in the Assembly on July 24 was not necessary since the Leader of Opposition had declared his party’s support to it.

It is now clear that the chief minister’s move to woo two BJP MLAs to support the Bill was nothing but a diversionary tactic by him to contain growing dissidence in the Congress.

“The two BJP MLAs are, technically, still with us,” BJP spokesman Rajneesh Agrawal claimed to this newspaper.