Newly-appointed Justice Banerjee will have a tenure of a little over four years in the apex court. 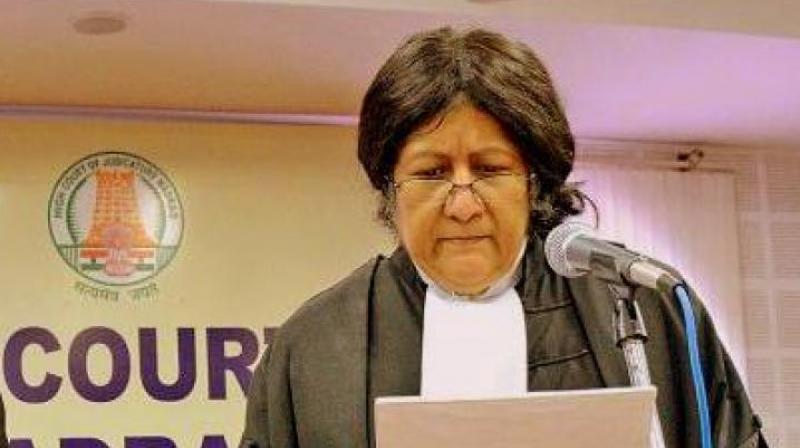 Justice Indira Banerjee started out as a lawyer on July 5, 1985 and practised in the Calcutta High Court. (Photo: File)

New Delhi: For the first time in 68 years, the Supreme Court will have three sitting woman judges following the elevation of Madras high court chief justice Indira Banerjee to the top court. The other sitting woman Supreme Court judges are Justices R. Bhanumathi and Indu Malhotra.

Apart from chief justice Banerjee, chief justices of Uttarakhand and Orissa high courts — K.M. Joseph and Naveen Sharan  — were also elevated to the Supreme Court on Saturday, taking the total number of judges in the apex court to 25. There would still be six vacancies in the top court.

On Friday night, the law ministry notified the appointment of the three chief justices ending the eight-month-long suspense on the elevation of Justice Joseph, whose name was reiterated by the collegium last month.

Justice Joseph had struck down the imposition of President’s rule in Uttarakhand in 2016 after the dismissal of a Congress government led by Harish Rawat.

Justice Joseph’s name was recommended for appointment as a judge of the Supreme Court by the collegium headed by Chief Justice of India Dipak Misra on January 10.

On April 30, the government had returned the recommendation for reconsideration on the grounds that he lacked seniority.

The executive had also pointed out that several high courts remained unrepresented in the top court and Justice Joseph’s elevation would be against the principle of regional representation. His parent high court is the Kerala high court.

Newly-appointed Justice Banerjee will have a tenure of a little over four years in the apex court.

In its 68-year history, the apex court has had seven women judges  with the first one being Justice Fatima Beevi, followed by Justices Sujatha Manohar, Ruma Pal, Gyan Sudha Misra, Ranjana Desai, R. Bhanumathi and Indu Malhotra. Mostly only one-woman judge had served the institution at a particular point of time.

It was in 2011 during the tenure of former CJI Balakrishnan that the strength of judges of the apex court was increased from 25 to 31 to provide for appointment of at least two women judges. As a result Justices Gyan Sudha Misra and Ranjana Desai served during the same point of time. Now after seven years, the apex court will have three women judges serving at the same point of time.

Despite Union law minister Ravi Shankar Prasad requesting the apex court collegium to consider giving representation to communities which are not represented, the Supreme Court is yet to have a Scheduled Caste judge after CJI K.G. Balakrishnan retired in 2010.

So far, there have been only two Scheduled Caste judges in the top court. The first was Justice K. Ramaswami who joined in 1989 and served till 1994, followed by CJI Balakrishnan who joined the top court in 2000.