Ummedein: A ray of hope for cancer victims

A daily wage earner, Jatia, couldn’t buy the necessary medicines even after selling all his assets. 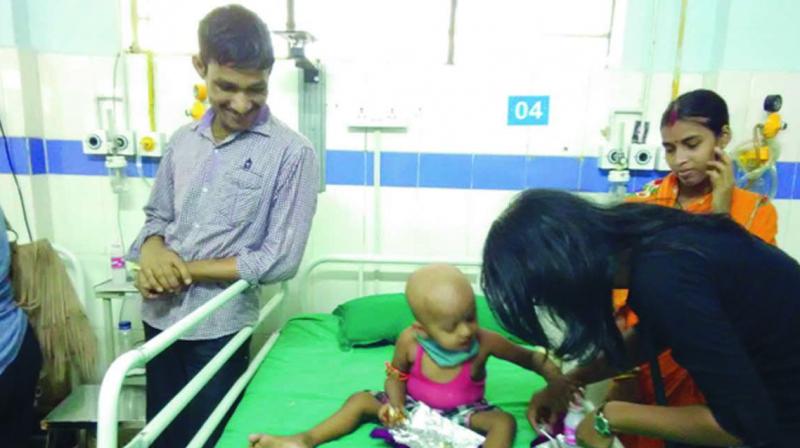 Government officials too came forward with information on facilities available for cancer patients which proved quite useful. At present, Jatia is leading a normal life.

Bhubaneshwar: It was in the year 2015 when two young IT professionals rushed to Manijanga village in Puri district of Odisha where a cancer patient named Jatia Behera contemplated ending his life for he couldn’t afford expensive medical treatment.

A daily wage earner, Jatia, couldn’t buy the necessary medicines even after selling all his assets. Frustrated, he decided to commit suicide. However, his fortunes changed when the two professionals intervened. The duo posted Jatia’s sad story on social media. Immediately, 100 assurances of help poured in from across the globe. Government officials too came forward with information on facilities available for cancer patients which proved quite useful. At present, Jatia is leading a normal life.

Soon enough, a motley group of professionals formed an organisation, Umeedein (hope), in Odisha and with an aim to create awareness that cancer was not a killer disease but could be cured if detected and treated at an early stage.

These professionals work in various parts of India and in the US, England and Australia in companies like Tech Mahindra, Wipro, TCS, Infosys and CTS. Once every year during vacations, they visit Odisha and organise seminars, workshops, counselling programmes, panel discussions, exhibitions and street plays to create cancer awareness.

These professionals include software engineers, top managers of multi-national firms, doctors and senior central and state government officials. Besides these, common people, including auto-rickshaw drivers and students have also been enrolled.  Also the state’s renowned oncologist Dr Kshitish Mishra, hematologist Dr Prabodh Kumar Das and dentist and oral hygiene specialist Dr Reetik Das are the guiding force behind the organisation.

“In rural Odisha, most people are ignorant of cancer. They live with many myths associated with the disease. They consider cancer an outcome of black magic and that chemotherapy is made from snake venom to kill poisonous cancer virus and hence can also kill the patient. They also think radiotherapy spreads cancer to the whole body like a wildfire. We try to repel such myths,” Dr Prabodh Kumar Das said. He added frequent interactions of patients with doctors at their villages gave them new lease of life. During awareness drives, the professionals along with doctors patiently explain the reasons behind occurrence of cancer, myths associated with it and measures to battle it.

Since huge amounts of money are required to conduct awareness drives and support patients, the unmarried youth try not to make their weddings a grand affair while the married ones save money by cutting expenses on their children’s birthday celebrations among others. Besides this, they also part with a portion of their salaries.

All members of Umeedein are treated equally. As a principle, the organisation and its members does not accept prizes or awards from any government or non-government organisations (NGOs). “This gives every member of the group a feeling of equality,” they said.