Overbridges needed to save tigers on Madhya Pradesh’s tracks that pass through sanctuary. 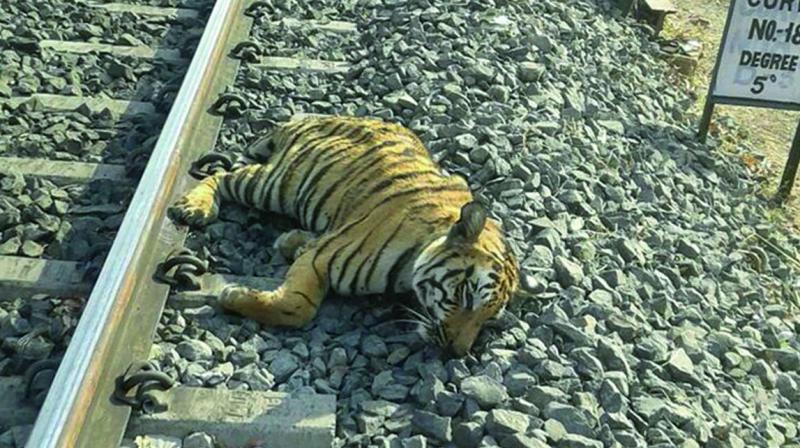 The caracas of a tiger lies on a railway track. (Photo: PTI)

Bhopal: An expert group has advised the Madhya Pradesh government to build one and half dozen overbridges and underpaths, besides fencing,  to help big cats negotiate a small stretch of a railway line passing through a sanctuary that has seen train-hits killing nine animals in the past three years. Notorious as the “suicide point of the majestic”, the track cuts a corridor used by big cats from Ratapani sanctuary to approach Gharadia nullah to drink water.

The latest casualty on the track was that of two sub-adult female tigers which were run over by trains in a span of three months from February-April this year, triggering an outcry among conservationists. “The Nagpur-based Wildlife Conservation Trust (WCT), entrusted with the task to pinpoint reasons behind the recurring deaths of big cats in train-hits, has completed the project report. It will be submitted to the railway ministry for evaluation by its engineering branch before its implementation”, said R P Singh, additional principal chief conservator of forest of MP forest department.

The vulnerable spot lies in Budhni- Midghat stretch of the 12-km Itarsi-Betul railway line in Sehore district. Although, yet to be declared a tiger reserve, the sanctuary is currently home to 21 tigers. “We still find it mysterious as to why the big cats use the track as their passage to cross over to the other side risking fatal injuries to their soft paws”, Mr Singh said. According to him, the 12 km Itarsi-Betul railway line, with two tracks, is considered one of the busiest rail traffic in the region. 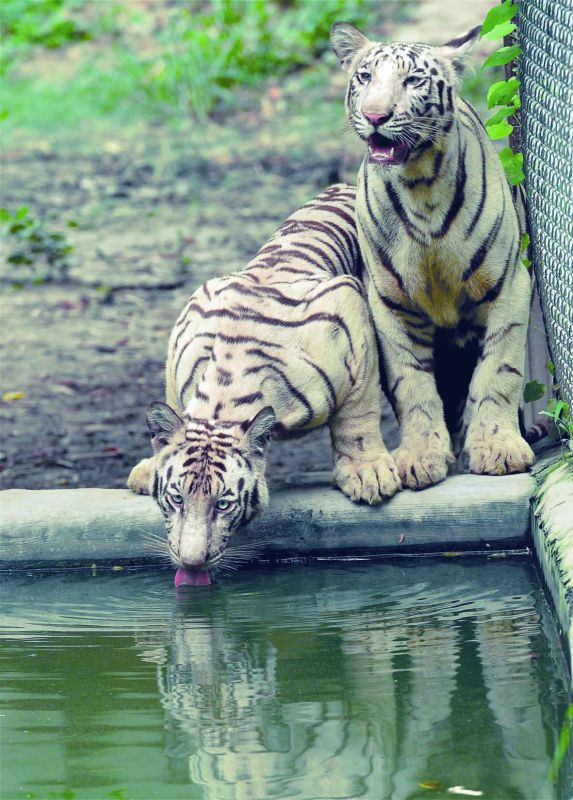 The railway network in the area has recently been expanded with the laying of a third railway line which has provisions for safe passage of the big cats.  But, the two existing railway lines that pass through several tunnels and difficult terrains lack such safety provisions.  “Construction of over and under paths at strategic places in the stretch has been recommended by WCT,” Mr Singh said.

“The innovative way in which the project has been conceived to protect the big cats from being hit by trains in the track is tipped to be a trend setter in wildlife conservation,” a senior forest officer. In fact, two other such killer tracks have been identified in the state. They are Shahdol-Umeria railway track passing through Sanjay-Dubri tiger reserve and Satna-Manepur railway track passing through a sanctuary.

These two tracks have witnessed death of total 11 big cats, including three tigers and eight leopards, in separate train accidents in the last three years. “We have suggested regulation of speed of trains passing through these railway tracks to protect the wild animals,” Mr Singh said. The three killer tracks have also claimed lives of at least 100 other wild animals including deer, boar and bison in the last three years, sources said.

MP is known as tiger state witnessing growth in tiger population to 397 as per the latest census. The National Tiger Conservation Authority (NCTA) has identified 250-km stretches of railway lines, spread across different regions in the country, as threats to tigers and other wildlife. “The tiger corridors are getting fragmented by the day, especially because of linear infrastructure such as railway tracks, highways and power lines. If we cannot avoid projects, we have to ensure a safe passage for the animals,” an official of NTCA told this newspaper.

Bullet points # The Budhni-Midghat railway track passing through Ratapani sanctuary in Madhya Pradesh has witnessed death of total nine big cats, including three tigers and six leopards in separate train accidents in last three years, earning it infamy as the “suicide point of the majestic”. # Experts have suggested construction of one and half dozen over and under paths, besides fencing, for safe passage of animals.

# Two other such killer tracks passing through Sanjay-Dubri tiger reserve and Satna sanctuary in the state have witnessed deaths of 11 big cats, including three tigers and eight leopards, in last three years. # A total of 20 big cats, including six tigers and 14 leopards, have been run over by trains on the three killer tracks in MP in the last three years. Besides, at least 100 other wild animals were also killed during the period.