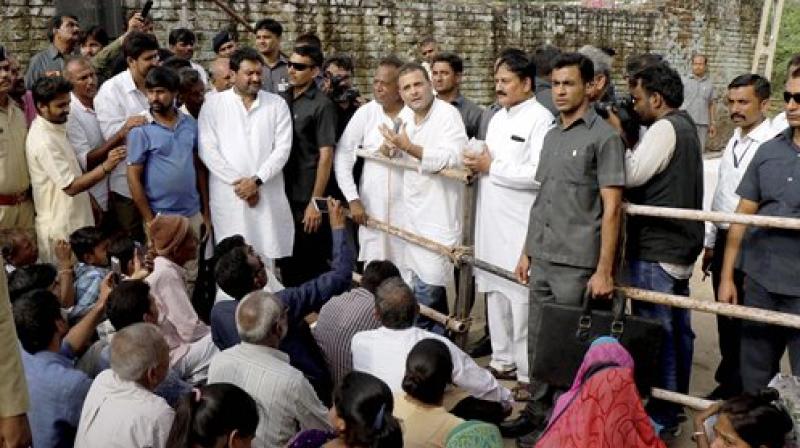 New Delhi: The Congress and the BJP entered into a full-blown war after the cavalcade of Rahul Gandhi, the Congress vice-president, was attacked while he was touring the flood-hit areas of Gujarat.

Reacting sharply, former PM Manmohan Singh said, “I condemn the attack on Mr Gandhi in Gujarat. Political violence has no place in a democracy.”

Congress spokesperson Abhishek Singhvi alleged that when Mr Gandhi was passing through the Lal Chowk area on his way to flood-affected areas of Banaskantha, he was atta-cked with cement bricks allegedly by BJP “goons”.

Not one to sit back, BJP spokesperson Sambit Patra said, “For God’s sake, don’t call people goons. People are tired of the kind of politics that Mr Gandhi and his party are indulging in. Let us respect people’s emotions.”

Gujarat CM Vijay Rupani tweeted, “During Mr. Gandhi’s visit, the Gujarat Congress MLAs are nowhere to be seen. This is what the people want to know.”

Senior Congress leader Ahmed Patel sought the government to initiate an enquiry against those responsible for Mr Gandhi’s safety. Condemning the attack, the Gujarat CM said, “I have instructed the concerned officials to take strict action against the guilty.”

After the attack, Mr Gandhi tweeted, “Neither black flags, nor stones will deter us. We will put our full strength in helping the people.”

The Congress is likely to raise the issue during the ongoing monsoon session of Parliament and dem-and the government to explain the security lapse.