The privilege notice will be considered by the Rajya Sabha Chairman, and once he is satisfied it is expected to be sent to the privileges committee. 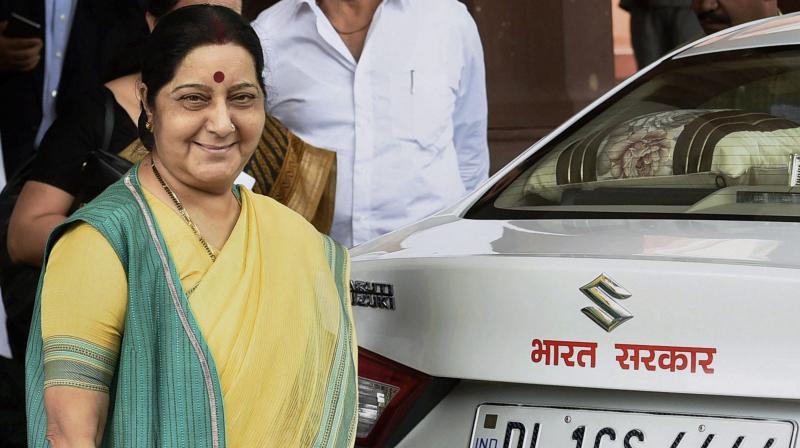 New Delhi: The Congress on Friday gave notice that it intended to move a privilege motion in the Rajya Sabha against external affairs minister Sushma Swaraj, with the party’s deputy leader Anand Sharma alleging that the minister had misled the Upper House while responding to a short duration discussion on India’s foreign policy and its engagement with strategic partners.

The notice said: “We hereby give notice of our intention to move a privilege motion under Rule 188 of the Rules and Procedures and Conduct of Business on the false and misleading statement given by Sushma Swaraj, minister for external affairs, on August 3, 2017 during her reply to the short duration discussion on ‘India’s Foreign Policy and Engagement with Strategic Partners’.”

The privilege notice will be considered by the Rajya Sabha Chairman, and once he is satisfied it is expected to be sent to the privileges committee.

Mr Sharma, while speaking in the discussion Thursday, had said that on the occasion of the 60th anniversary of the Bangdung Conference, the leaders of other countries remembered and recalled Pandit Jawaharlal Nehru but India’s statement and minister’s statement did not refer to Pandit Nehru in Bangdung. According to the Congress, while replying to the discussion, Ms Swaraj completely denied that any speech or statement was made by any representative of the Indian government at the 60th anniversary of the Bangdung Conference. The Congress, however, claimed that minister of state for external affairs V.K. Singh had given a speech in Bangdung on the 60th anniversary. A copy of Mr Singh’s speech in Bandung has been attached to the notice seeking the privilege motion.

Another issue raised in the privilege motion relates to Pakistan. Mr Sharma, taking part in the discussion along with other members, raised the issue that Prime Minister Narendra Modi had visited Pakistan while returning from Afaganistan on an unscheduled visit to wish Mr Nawaz Sharif on his birthday on December 25, 2015, but in response to which India was greeted by one of the worst terrorist attacks on its airbase in Pathankot immediately afterwards on January 2, 2016.

The Congress said that in her reply, the external affairs minister had said that India had cordial relations with Pakistan and was engaged in peace talks with Pakistan since the formation of the NDA government till the Burhan Wani encounter (in Kashmir, on July 8, 2016), after which Pakistan PM Nawaz Sharif declared him to be a freedom fighter and then relations deteriorated. The Congress claims this statement is totally false because as mentioned earlier, immediately after the PM’s visit to Lahore on December 25, 2015, the Pathankot airbase was attacked by Pakistan-based terrorists on January 2, 2016.