Under the leech therapy, three to four leeches are placed on the body of a patient for half an hour for bloodletting. 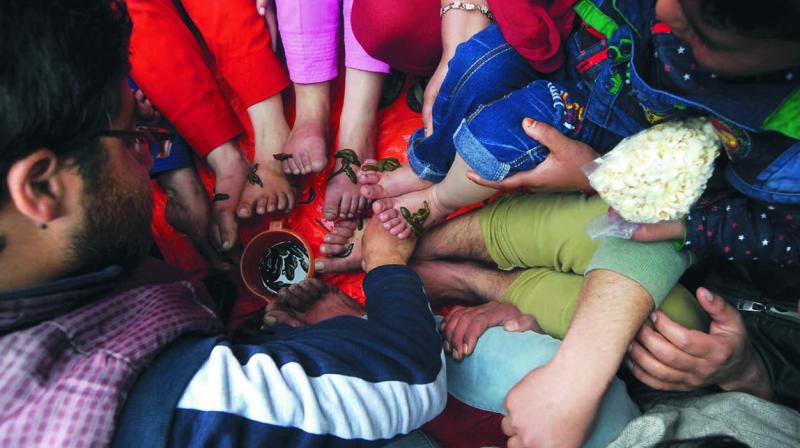 Sirnagar: Despite the leaps made by science and technology in recent years, people in Jammu & Kashmir still believe that leeches are the best remedy to heal various diseases. On Fridays and other special occasions like Milad-un-Nabi (Prophet Muhammad’s birth anniversary) and Meraj al-Aalam (the anniversary of his ascension to the Heaven), patients make a beeline to Srinagar’s lakeside Hazratbal shrine where leeches are applied to their bodies.

The Kashmiris believe this would heal them of pain, cure nervous system abnormalities, dental problems, skin diseases, infections, arthritis, chronic headaches and sinusitis. Under the leech therapy, three to four leeches are placed on the body of a patient for half an hour for bloodletting. The leeches are then killed and the patient is charged Rs 100 or even less per leech.

Navroz, which marks the beginning of spring, is another special occasion when leech therapy sessions are held all over the Valley. People throng to makeshift clinics of leech practitioners besides the three Unani hospitals in the Valley for leech therapy, in the belief that the therapy would be much more effective on Navroz, the first month of the Iranian solar calendar. Though J&K experiences subzero temperatures during winter that lead to accumulation of harmful toxins in the body, but many people on Navroz visit the hospitals to get their bodies detoxified by leech therapy.

“The results are encouraging. We are getting patients even from other parts of the country,” said Dr Muhammad Ismael, the in-charge of a Unani hospital. Interestingly, a banner put up at the reception hall of a hospital reads,  “Leeches are wonder-doctors. Do pay them a visit.” In view of the increasing number of patients relying on leech therapy, the government-run Unani hospitals apart from several private medical facilities and Unani and Panchkarma hospitals are using leeches on patients across the Valley.

A few patients interviewed by this correspondent said they were satisfied with the leech therapy. One Farooq Ahmed Najar said, “I was suffering from acute skin disorder. I visited two dermatologists and was under their treatment for eight months, but it was only after I went for leech therapy that the infection could be cured within three weeks.”

Many people consider leech therapy an alternative to pharmacological treatments. The leeches are known to treat various ailments in ancient Egypt! This is how it is, a medicinal leech, which has three jaws with tiny rows of teeth, pierces a person’s skin with their teeth and inserts anticoagulants through their saliva. The leeches are then allowed to extract blood, for 20 to 45 minutes at a time, from the person undergoing treatment. This equates to a relatively small amount of blood, up to 15 millilitres per leech.

Though leeches are mostly used in plastic surgery and other microsurgery in many parts of the world, but in the Valley “leech therapy has proved effective on patients as leeches secrete peptides and proteins that work to prevent blood clots. When you apply a leech on a patient the secretions or anticoagulants keep the blood flowing on wounds thus helping in the healing process”, said Dr Muhammad Yusuf, a Unani practitioner.

“For centuries the people have used leeches to cure everything from headaches to gangrene. It is a legitimate treatment that can help heal skin grafts and restore blood circulation,” he added. However, dermatologist Dr Imran Majid warned that use of leech therapy  could lead to serious side effects on a patient. “You have to be careful. If the same leech is used on more than one patient, it can lead to serious diseases due to blood mixing,” he said. The allopathic doctors discourage people from applying leech therapy on the  plea that little research has been done on the subject. The leech therapy is witnessing a revival of sorts in other parts of the world even in the West also for it is a simple and inexpensive means of preventing complications.