India   All India  05 Aug 2017  Have not violated law, truth will come out soon: K'taka minister after I-T raids
India, All India

Have not violated law, truth will come out soon: K'taka minister after I-T raids

The I-T department on Wednesday began its searches on various properties linked to Shivakumar. 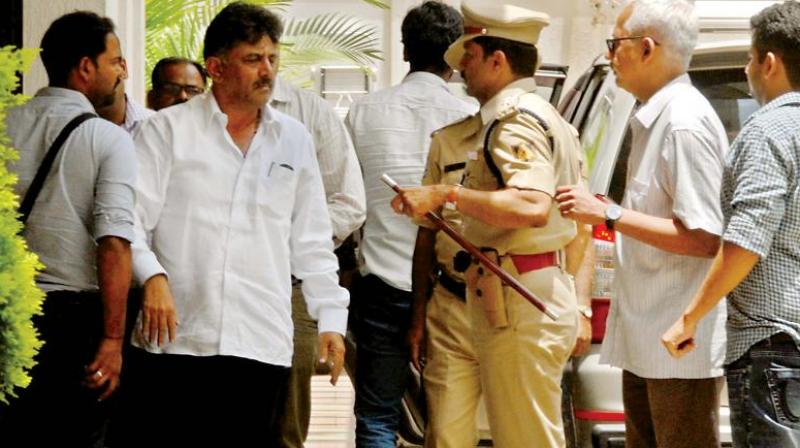 The I-T Department had on Wednesday conducted searches at 64 locations and properties linked to Shivakumar in a tax evasion case. (Photo: PTI)

Bengaluru: After being grilled by the Income Tax sleuths for three consecutive days in connection with an alleged tax evasion case, Karnataka Minister D K Shivakumar on Saturday said he has not violated the law and the truth will eventually come out.

In a swoop down that raised a political storm, the IT department on Wednesday began its searches on various properties linked to Shivakumar, who is hosting 44 Gujarat Congress MLAs at a resort on city outskirts to forestall alleged attempts by the BJP to poach on them ahead of the Rajya Sabha polls.

Ahmed Patel, political secretary to Congress chief Sonia Gandhi, is locked in a bitter fight in the election.

"I'm not the kind of person that violates the law and the Constitution...the truth will come out," he told reporters after emerging from his residence at a posh locality here.

Without divulging any details on the searches conducted at various properties linked to him, the power minister said, "Only after I get the entire panchnama and the documentation will I speak to you."

During the searches at about 66 places across the country in connection with a case of alleged tax evasion, IT officials said they have seized cash and jewellery worth over Rs 15 crore have so far.

Shivakumar, who hails from the Vokkaliga community, has considerable influence in Bengaluru Rural and neighbouring Ramanagara districts.

He is also the Congress' propaganda committee chief ahead of the 2018 Assembly polls.

The 55-year-old minister, considered a resourceful trouble shooter for the Congress with proximity to the party high command, is a six-time MLA.

Thanking the party and its leadership for backing him, Shivakumar said, "All my leaders across the country have stood by me in the crisis...I don't want to embarrass my party and I will not."

"At no point of time I will let down my leaders and my party,"he added.

Despite repeated queries from the mediapersons about the raids, Shivakumar said he would discuss it in detail later.

"I will speak to you later.. I'm going to a temple, then I'm going to the resort where MLAs are lodged,"he said.

"Things have been discussed, deliberated at various levels...I don't want to tell anything now," he added.

When asked whether the IT searches were complete, Shivakumar said, "You saw the officials walking out."

"I don't know," he said when asked about the raids in other places.

"I have got to know that it (raids) has happened at 70 or 80 places only through you...Please find out yourself," he said.

On Wednesday, Chief Minister Siddaramaiah in a statement had alleged that the IT department action was an attempt to silence the voice against the BJP.

He had yesterday termed the IT raids against Shivakumar a "politically motivated" move on part of the Centre.

The Karnataka government has expressed its "strong protest" to the Centre over the use of CRPF personnel during searches, saying it cast aspersion on the state police.

The raids at the resort, had on August 2 sparked a huge political row with Parliament getting disrupted and the Congress terming it an "unprecedented witch-hunt" to win one Rajya Sabha seat.