Lama was arrested by Siliguri Police on Friday night for alleged involvement in fresh clashes in the hills. 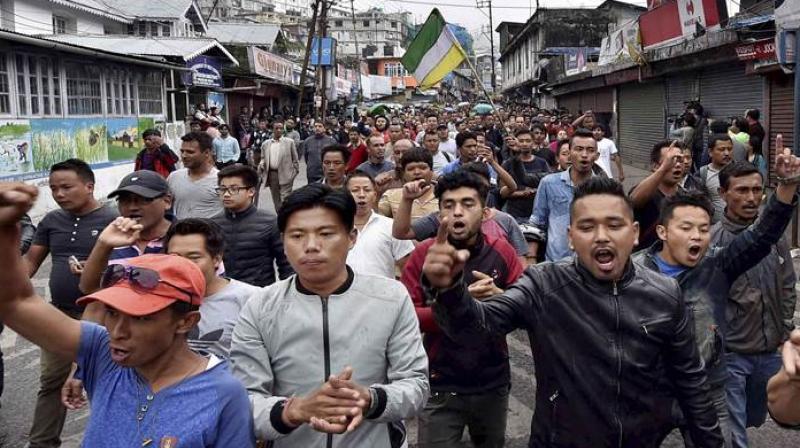 Several protesters and police personnel were injured in the clashes that took place in Sukna area of the hills. (Photo: PTI/Representational)

Darjeeling: In a fresh round of violence, Gorkha Janmukti Morcha (GJM) leader and former Gorkhaland Territorial Administration Sabhasad of Tukdah Teesta Valley, Norbu Lama was arrested and remanded to the custody of Criminal Investigation Department (CID) for seven days on Saturday.

Lama was arrested by Siliguri Police on Friday night for alleged involvement in fresh clashes in the hills.

He has been charged under different sections of the Indian Penal Code (IPC) relating to rioting, arson, criminal conspiracy with sections of the Arms Act in connection with the June 8 incident.

On June 8, GJM supporters had clashed with the security forces in Darjeeling town. Where more than 45 security force personnel were injured in the clash; a police booth was set on fire and 15 police vehicles were torched along with a State Government Bus.

Following that, Army was deployed in Darjeeling, Ghoom and Kurseong to control the situation.

Earlier in the week, GJM supporters and Police clashed in Jaigaon.

The protest turned violent at Jaigaon in Alipurduar district when police stopped a rally by protesters, injuring many including police personnel.

The GJM supporters took our rallies at several parts of Darjeeling and other districts of North Bengal carrying black flags in protest against the recent crackdown on pro Gorkhaland supporters.

The protesters demanded centre's intervention for the cause of Gorkhaland.

Several protesters and police personnel were injured in the clashes that took place in Sukna area of the hills.

The police and security forces patrolled the streets of the hills and kept a tight vigil at all entry and exit routes.