Outlining the future roadmap, the Economic Survey was tabled by finance minister Nirmala Sitharaman in the Rajya Sabha on Thursday. 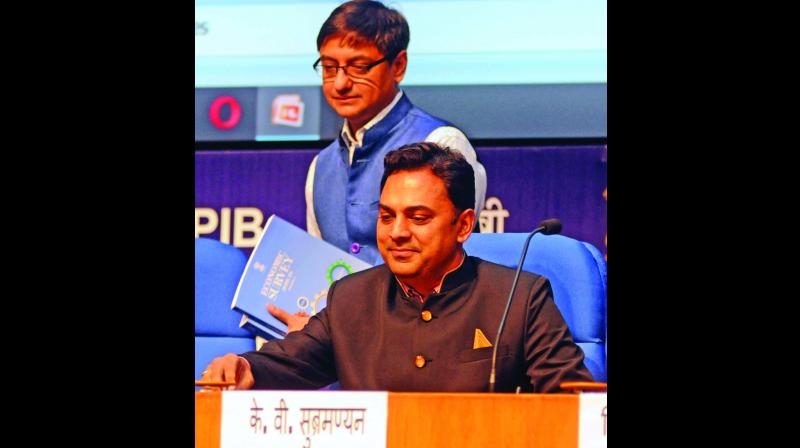 New Delhi: A day before Union Budget is presented to Parliament, the Economic Survey 2019 has predicted India’s gross domestic product (GDP) will grow at seven per cent in the financial year 2019-20, as against 6.8 per cent in the previous fiscal, reflecting a recovery in the economy after a deceleration in the growth momentum in 2018-19. It said the country needs attain a growth rate of eight per cent to make India a $5 trillion economy by 2025.

Outlining the future roadmap, the Economic Survey was tabled by finance minister Nirmala Sitharaman in the Rajya Sabha on Thursday. However, the survey emphasises mostly on jobs creation, private investments, exports, infrastructure, ensuring the delivery of beneficiary schemes, etc among key issues the country is facing amid the slowdown.

On the fiscal deficit, it was at 3.4 per cent for 2018-19, but analysts expected a short-term realignment of the fiscal consolidation map with the deficit targets being marginally raised for the current fiscal in the Budget for 2019-20 to be presented by Ms Sitharaman on Friday.

However, Mr Subramanian called for the government to stick to the fiscal consolidation path or risk crowding out investment due to large public borrowings.

“Investment as a percentage of GDP has to be more than 30 percentage points. We need to invest at close to 35 percentage points going forward, in order to sustain the virtuous cycle triggered by investment. Let private investment increase, this will make firms more productive, bringing jobs and increasing exports, making firms able to compete in international markets; this will raise demand and further investment,” the CEA added.

On the micro, small and medium enterprises sector, the survey emphasised that the bulk of job creation would come from this segment.

Highlighting the immense potential of data of societal interest, the survey said the data should be “of the people, by the people, for the people”. The survey also flagged the need to prepare for ageing of the population, necessitating more healthcare investment and raising the retirement age in a phased manner.

“Contract enforcement remains the biggest constraint to improving the ease of doing business rankings,” it said.

“Political stability in the country should push the animal spirits of the economy, while higher capacity utilisation and an uptick in business expectations should increase investment activity in 2019-20,” the survey said, adding that oil prices will decline in the current fiscal and push consumption as well.

“However, downside risks to consumption remain. The extent of recovery in the farm sector and farm prices will decide the push to rural consumption, which is also dependent on the monsoon,” the survey said, adding that some regions were expected to receive less than normal rains, that could be detrimental for crop production.

Reacting to the survey, India Inc termed its growth target as “pragmatic” and pointed towards a cautious optimism about the economy on the back of investment revival and rural consumption. “The seven per cent growth pegged by the survey is a pragmatic target and with the right policy levers in place,” CII director-general Chandrajit Banerjee said.

“We can step up growth to sustain an average growth rate of eight per cent over the next five years. Concerted efforts are required to drive an improvement in private investment along with robust consumption to lift growth in the current fiscal from a multi-year low of 6.8 per cent posted in 2018-19,” Mr Banerjee added.

Expressing similar views, Assocham chief B.K. Goenka also said the growth projections for the current fiscal point to a cautious optimism about the economy. “Some of the difficult issues like liquidity concerns of NBFCs and the impact on consumption would require bold moves by the government and the Reserve Bank. The focus on direct transfers to farmers and greater attention to agricultural infrastructure will raise rural incomes and demand, giving a boost to growth,” Mr Goenka added.