Indore building which Akash Vijayvargiya batted for demolished by authorities

The court had asked IMC to arrange temporary shelter for Lal for three months within two days. 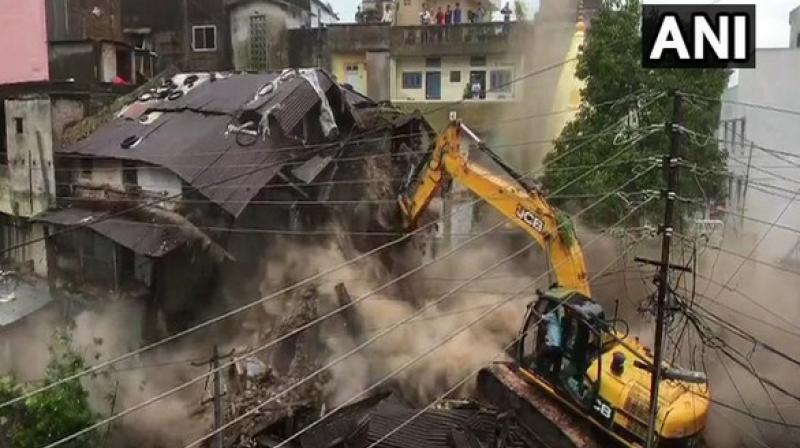 Bhure Lal, owner of the building, had approached Madhya Pradesh HC against demolition but the court refused to stay the process. (Photo: ANI)

Indore: The Indore Municipal Corporation (IMC) on Friday demolished the building over which BJP MLA Akash Vijayvargiya had thrashed a municipal corporation officer with a cricket bat on June 26.

Bhure Lal, owner of the building, had approached the Madhya Pradesh High Court against demolition but the court refused to stay the process.

However, the court had asked IMC to arrange temporary shelter for Lal for three months within two days.

Akash, son of BJP General Secretary Kailash Vijayvargiya and a first-time MLA, chased away an IMC officer who was on an anti-encroachment drive, on June 26.

A video of the dramatic incident showing the legislator beating up the officer with a cricket bat went viral across social media platforms, drawing criticism from the Opposition.

Akash was arrested and later released from jail on bail and was garlanded by his supporters. His supporters had even fired celebratory gunshots outside his office as their leader walked out of prison.

The legislator from Indore-3 Assembly constituency had claimed that certain Congress legislators were getting buildings in Indore demolished in connivance with the Municipal Corporation without consulting him.

Akash father Kailash Vijayvargiya had defended him and called him a "novice player".

On Tuesday, Modi had expressed displeasure over Akash's behaviour at the BJP Parliamentary Party meeting, saying "such behaviour is unacceptable irrespective of whose son he is".

Later, the BJP has issued a show cause notice to party Akash.