Congress and HAM have been upset with Tejashwi Yadav’s absence from Bihar for almost a month after the poll results. 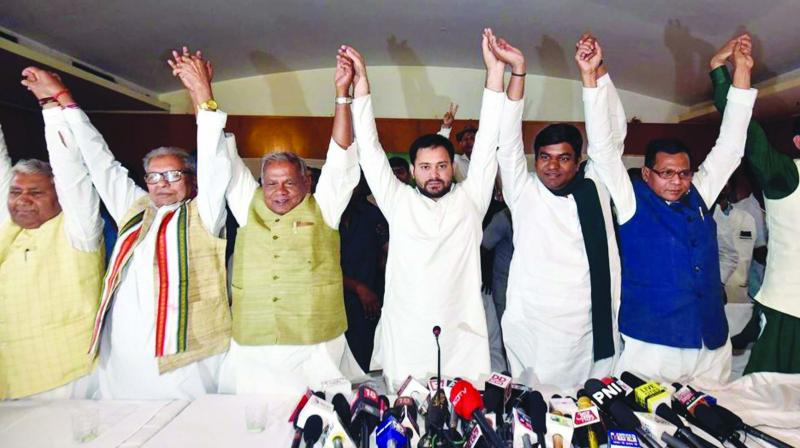 Patna: Cracks seem to be brewing in the RJD-led grand alliance in Bihar which was formed ahead of the Lok Sabha polls.

While the grand alliance partners want introspection at the organisational level to find reasons for the humiliating defeat, political analysts do not rule out the possibility of UP-like split in the state.

The Congress leader in Bihar Assembly, Sadanand Singh, has been stressing that “the party must improve its base and explore the possibility of going solo in the 2020 state Assembly elections”.

When asked about the future of grand alliance, he said, “There is no coordination among political parties who had joined the alliance before the Lok Sabha elections.”

Sources claim that Jitan Ram Manjhi was referring to Tejashwi Yadav who has emerged as a de facto leader of the RJD after his father Lalu Yadav was sent to jail in connection with fodder scam cases.

Reports also suggest that the Congress and HAM have been upset with Tejashwi Yadav’s absence from Bihar for almost a month after the Lok Sabha poll results. However, Tejashwi Yadav returned to Patna earlier this week but grand alliance insiders are of the opinion that “his absence from active politics may lead to a crisis not only in the RJD but also in the grand alliance”.

Questions were also raised on his silence on the issue of AES epidemic which has affected the lives of more than 600 children in Bihar.

When the Opposition parties, including the Congress and RJD leaders, visited Muzaffarpur to meet the families of AES patients, they were asked about Tejashwi Yadav’s absence.

Recently, posters declaring Tejashwi Yadav “missing” were also put up in Muzaffarpur where more than 137 children have died due to encephalitis since June 1. Protesters had announced a reward of Rs 5,100 with a note that he has been missing since the Lok Sabha poll results were declared.

Sources claim that his absence from public life for a month triggered surprise and confusion in the grand alliance as political parties, especially Congress, expected him to be in Bihar at the time when families were losing their children due to Acute Encephalitis Syndrome (AES) and brain fever.

The rising cases of encephalitis and the death toll in the state not only raise questions on the state government’s inability to deal with the crisis but also exposed the ailing healthcare system.

“The Opposition parties, including Congress, are not happy with the attitude of Tejashwi Yadav and the current scenario only raises questions on the future of grand alliance in Bihar,” political analysts said.

However, Tejashwi Yadav in his tweet tried to clarify that he has been, “constantly following the untimely loss of hundreds of poor kids due to AES. In this tragic moment asked party workers, leaders to visit affected families without getting into Photo- op and MPs to raise it in Parliament and that’s why PM responded. My Dear Bihar! I am very much here”.