Maharu Pawar, who was absconding since the incident took place on Sunday, was arrested from neighbouring Nandurbar district on Wednesday 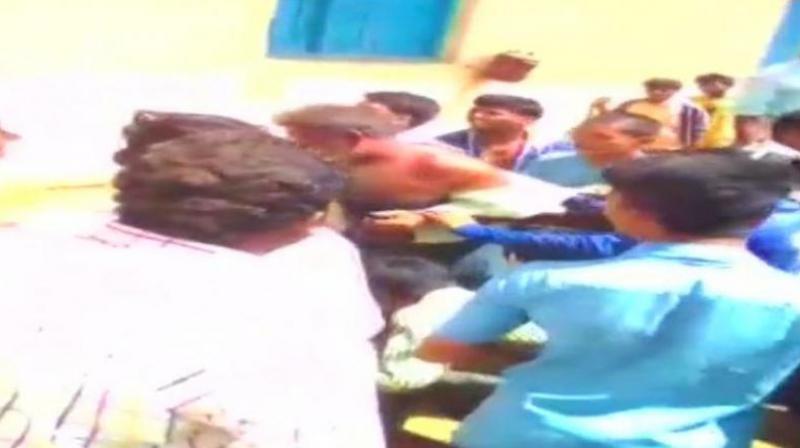 On July 1, five men of a nomadic tribe were lynched by a mob in Dhule's Rainpada village on the suspicion of being child-lifters. (Photo: File/ANI)

Dhule: The main accused in the lynching of five men on suspicion of child lifting has been arrested, police said on Thursday.

Maharu Pawar, 22, was arrested from the neighbouring Nandurbar district on Wednesday, Dhule Superintendent of Police M Ramkumar told news agency PTI. Pawar was absconding since the incident took place on Sunday and hiding in Nandurbar, he said.

"Our team was searching for him and was able to nab him," he said.

In a video of the incident that went viral on social media, Pawar was purportedly seen leading the mob while thrashing the five men with sticks and rods, Ramkumar said. Pawar is the 24th person arrested in the case, the SP said, adding that a search was on for some more accused.

On July 1, five men of a nomadic tribe were lynched by a mob in Dhule's Rainpada village on the suspicion of being child-lifters, sending shock waves through the state. According to videos which went viral, one of the five victims apparently tried to speak to a six-year-old girl after which they were pounced upon, stoned and thrashed with sticks and chappals.

The provocation was apparently some rumours on social media which suggested that a gang of child-lifters was active in the area.

According to police officials and locals, the victims were first attacked by a group of "highly inebriated" people in Kakar pada village. The five men were then brought to the adjoining Rainpada village while being continuously thrashed along the one-km stretch.

The police received a distress call around 11 am on July 1 and they reached the spot around 12 noon, a distance of nearly 40 km, Pimpalner's assistant police inspector Yogesh Khatkal had earlier said. He said there was a crowd of about 3,000 people when they reached the incident site.

"When we reached there, all the five were dead," Khatkal had said.

The tribals had arrived there on last Saturday night and had planned to go to the police station on Sunday to register themselves.

The victims belonged to the nomadic Nath Gosavi community who move from place to place in Maharashtra in search of food and work. Whenever people from this community visit a village, they report to the local police station about their stay. Incidents of lynching triggered by rumours claimed 10 lives in 14 incidents in Maharashtra during the last one-and-a-half months, the police had earlier said.

In the wake of the horrific crime, the police decided to compile data of lynchings so as to devise a preventive strategy, Additional Director General of Police (Law and Order) Bipin Bihari had said.