A total of 311 people from various districts are under observation, Health Minister K K Shailaja said. 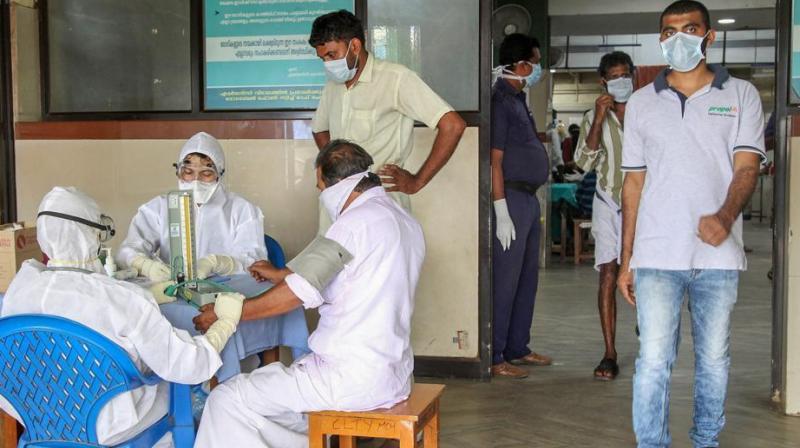 Shailaja said samples collected from the five people currently being treated at the isolation ward of Kalamassery Medical College Hospital have been sent to National Institute of Virology in Pune this morning. (Photo: File)

Kochi: The Kerala government on Wednesday said the condition of the college student being treated at a private hospital for Nipah virus is stable while the condition of five others kept under watch was improving.

A total of 311 people from various districts are under observation, Health Minister K K Shailaja said.

"The condition of the student is stable. It has not turned worse," she said, a day after the 23-year old student here was confirmed to be infected with Nipah virus. A medical bulletin issued by the hospital Tuesday night had said he was admitted on May 30 and "the patient is clinically stable, slowly improving and his fever is subsiding."

Talking to reporters here, Shailaja said samples collected from the five people currently being treated at the isolation ward of Kalamassery Medical College Hospital have been sent to National Institute of Virology in Pune this morning.

"The preliminary assessment of their health shows that they are not in a severe condition. Their health now is better than yesterday. But they are under constant watch of doctors. We expect tests of their blood samples would be negative. But we should wait till the final results come," Shailaja, who is constantly monitoring the situation with medical experts and top health officials, said.

She said treatment for Nipah will start only if their blood test confirm they have contracted the infectious disease. The results are expected by Thursday evening. "We should be very careful till the completion of the incubation period of the virus," she said. At present, they were being treated for fever and sore throat, said the minister. According to the World Health Organisation, the incubation period (interval from infection to the onset of symptoms) is believed to range from 4 to 14 days.

Shailaja, who has been camping here since Monday to lead the state's fight against the potentially deadly virus, said 311 people from various districts were under observation of health officials and an analysis is being carried out to confirm on how many of them had directly contacted with the student infected with the virus. A government bulletin had said Tuesday that a list of 311 people, who have interacted with the student, has been prepared and they were under medical observation.

Hailing from North Paravur in Ernakulam, the 23-year-old is studying in a college in Thodupuzha in Idukki district. The student, who was suffering from fever, had gone to Thrissur district with a group of students to attend a training programme.

The government has urged people not to panic and take precautionary measures to prevent the spread of the disease. The administration has launched an awareness campaign through the media to meet the challenge.

Union Health Minister Harsh Vardhan had also spoken to Shailaja Tuesday to discuss the situation and assured all support from the Centre to the state. A control room has also been set up and the Strategic Health Operations Centre of the National Centre for Disease Control has been activated, phone number for which is 011-23978046, a health ministry statement said in New Delhi. According to state government figures, the Nipah virus had claimed 17 lives -- 14 in Kozhikode and three in neighbouring Malappuram in May last year.