The excavation that began in March 2018 at Sanauli was conducted by a 10-member team with S. K. Manjul of the Institute of Archaeology. 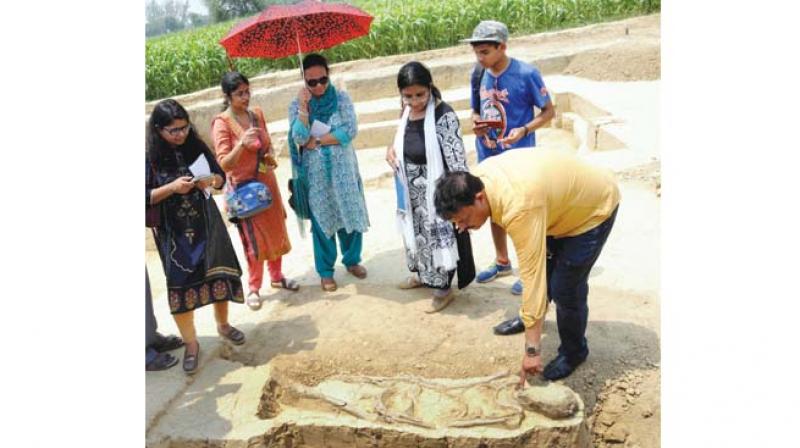 Archaeologists at the site in Baghpat. (Photo: G.N. Jha)

Lucknow: Chariots dating back to the pre-iron age have been found in an excavation in Sanauli in Baghpat district in Uttar Pradesh.

The excavation by a team of archaeologists was unveiled on Monday, showing burial pits with chariots in the Pre-Iron Age (Bronze). This is the first time that a chariot has figured in the excavations.

The excavation that began in March 2018 at Sanauli was conducted by a 10-member team with S. K. Manjul of the Institute of Archaeology.

Chariots figure prominently in the Rig Veda, which gives evidence of their presence in India in the 2nd millennium BCE.

Mr Manjul informed that in the past, there has been evidence of horse in the Chalcolithic period. This discovery is an added thrust to inquire further into ancient Indian history. If we go by the world history, there is evidence of wheeled vehicles only from the mid-4th millennium BCE in Mesopotamia, the Northern Caucasus (Maykop culture Bronze Age) and Central Europe. The question, concerning which culture originally invented the wheeled vehicle, remains unresolved.