Meghalaya home minister James Sangma appealed to people on Monday to stay calm and said that the government was doing everything to restore peace. 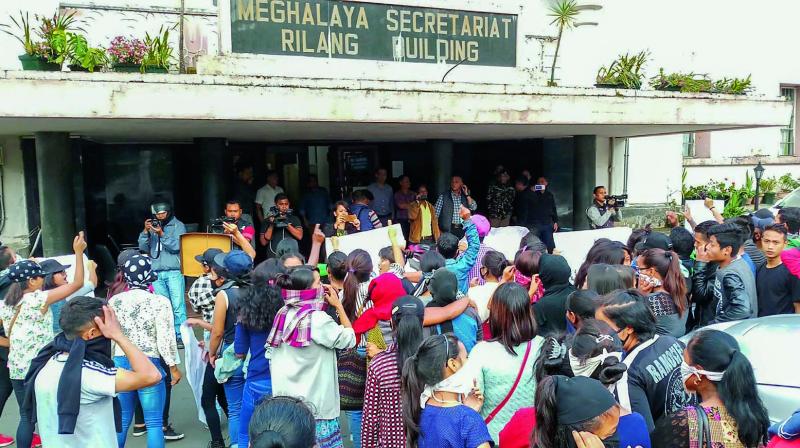 Guwahati: The situation in trouble-torn Shillong deteriorated on Monday when a mob of nearly 150 people defied the curfew and barged into the state secretariat building where Meghalaya chief minister Conrad K. Sangma was chairing an all-party meeting to discuss ways to manage the escalating crisis.

The demonstration at the secretariat caused a security scare as the protesters broke the main gate of the building and shouted slogans, forcing the state administration to call the Army. They were demanding the shifting residents of the Sweepers Colony from the city and arrest of those involved in alleged violence against the locals.

The Army controlled the situation and carried out a flag-march in the area, security sources said.

The Centre has rushed an additional 1,000 paramilitary personnel to Meghalaya. This is in addition to four CRPF and two ITBP companies sent earlier. A four-member ministerial team from Punjab met the Meghalaya chief minister on Monday and assessed the situation. A one-man team of National Commission for Minorities will visit Shillong on Tuesday.

Violence broke out last Thursday after local Khasi people clashed with Sikh migrants from Punjab, who largely work as sanitation workers in Shillong, after a Khasi bus handyman was allegedly beaten up by Punjabi Line colony residents over a parking issue. More than 10 people, including policemen, were injured in the violence. The Khasi protesters are demanding the relocation of the Sweeper Colony from the Punjabi Line area and arrest of those involved in alleged violence against the locals.

Monday’s protest at the secretariat came within hours of a mob of nearly 400 youths defying the curfew and injuring three CRPF personnel by pelting stones at their camp near the Mowlai bridge on Sunday night. After the curfew was relaxed for eight hours on Sunday, beginning at 5 am, fresh bouts of violence were reported at night, forcing police to use tear gas shells to quell a mob.

In the wake of prevailing tension and incidents of stone-pelting and violence, the state administration on Monday decided to extend the night curfew from 4 pm in some more areas of Shillong.

“The curfew has been imposed from 4 pm on Monday to 5 am on Tuesday in Shillong as there is a likelihood that breach of peace may spread to other parts of the city,” said East Khasi Hills deputy commissioner P.S. Dkhar.

He admitted that the situation is very tense in some areas and the administration has decided to continue the suspension of mobile Internet services.

More than 400 people were still in a makeshift shelter camp of the Army at Garison Ground, said security sources.

Mr Sangma on Sunday hinted at a conspiracy behind the violence, claiming that there are certain people funding this agitation.

Meghalaya home minister James Sangma appealed to people on Monday to stay calm and said that the government was doing everything to restore peace.

“The agitators should stop protesting as the government has already met many of their demands, which includes the arrest of the accused in the assault of the bus handyman on May 31,” he added.

Concerned about reports of security threats in Punjabi Line area, the Amarinder Singh government in Punjab has sent a four-member team, headed by Cabinet minister Sukhjinder Randhawa, to Shillong to assess the situation. The team on Monday met the chief minister who assured it that no gurdwara had been damaged during the violence.

The National Commission for Minorities has also decided to send one of its members, Manjit Singh Rai, to Shillong to assess the situation.

NCM chairperson Syed Ghayorul Hasan Rizvi said, “We are sending our member Mr Rai who is from Punjab to look into the violence. He would file a report on his findings following which future course of action will be decided. Mr Rai will go to Shillong on Tuesday and meet all those affected by the violence.”